Marcos: BBL will lead us to perdition 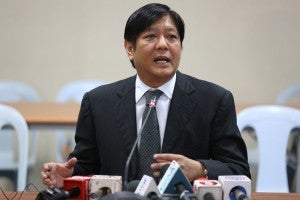 Davao del Sur Gov. Claude Bautista protested that the authorities in the provinces proposed to be included in the Bangsamoro entity had not even been consulted.

“We request that in order to pursue a lasting peace in Mindanao, the wish of those who do not want to join the proposed arrangement should be respected,” Bautista said in his remarks to the committee on local governments headed by Sen. Ferdinand Marcos Jr. conducting the hearing.

Bautista’s sentiment echoed those stated during the hearing by Governors Daisy Avance-Fuentes of South Cotabato, Jose Alvarez of Palawan and Antonio Cerilles of Zamboanga del Sur.

“I have prepared a substitute measure that would be good for all,” said Marcos, chair of the Senate local government committee holding hearings on the proposed charter of the proposed Bangsamoro entity that would replace the ARMM.

Marcos said that the BBL “in its present form and substance will not bring us any closer to peace” but “lead us to perdition.”

He said that the Office of the Presidential Adviser on the Peace Process “totally ignored” some of the major stakeholders in their negotiations for peace, including the Moro National Liberation Front, the Sultanate of Sulu, the lumad, indigenous people, Christians and local government units.

He said his proposed alternative arrangement would be a “product of what we have learned in the hearings.”

The senator said his substitute bill would include the findings of Sen. Miriam Defensor-Santiago’s committee on constitutional amendments that certain provisions in the draft BBL were unconstitutional.

Marcos said that among others, the controversial “opt-in” provision that would expand the proposed Bangsamoro territory should be removed.

Marcos’ announcement of coming up with a substitute bill for BBL came just a week before Congress adjourns its session on June 11.

His announcement also meant that the Senate would not meet Malacañang’s June 11 target for the approval by Congress of the BBL in time for the election of the Bangsamoro parliament next year.

“The framework of the BBL doesn’t even give us leeway to be consulted whether we want to be included in the BBL,” Bautista said.

Bautista also said he knew that Davao Occidental also did not want to be included in the core territory, something which Marcos confirmed was the sentiment given to him by Davao Occidental officials worried about the “opt-in” provision.

Expressing reservations on the draft BBL was the province of Tawi-Tawi while Isabela City in Basilan province said it did not want the BBL.

Also at the hearing, ARMM officials expressed support for the proposed BBL but some of them also raised some concerns on BBL provisions and made suggestions to improve the new political entity so there would be no repeat of the errors of the ARMM which the Palace had declared earlier to be a “failed experiment.”

ARMM Gov. Mujib Hataman, who took over the regional government in 2011, said that ARMM under the Aquino administration was better off now. He said that GDP increased to 3.6 percent from a negative .3 percent in 2011.