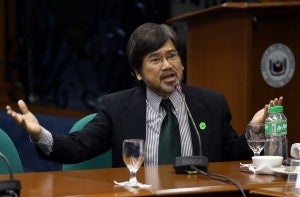 Can a “foundling” run for President?

United Nationalist Alliance (UNA) interim secretary general JV Bautista said Sen. Grace Poe, apart from questions about her residency, could be disqualified from running for a higher office and even be unseated as a member of the Senate for not being a “natural-born Filipino.”

Poe, an adopted daughter of the late movie actor Fernando Poe Jr. and actress Susan Roces, was abandoned in a church in Jaro, Iloilo province.

Bautista brought up the question of Poe’s citizenship in a news forum in San Juan City a day after UNA interim president and Navotas Rep. Toby Tiangco claimed that Poe was not qualified to run for Vice President or President next year because she did not meet the 10-year residency requirement in the Constitution.

“A foundling by definition is stateless,” Bautista said.

Election lawyer Romulo Macalintal has said Poe is considered a Filipino and a natural-born citizen under the United Nations Convention on the Reduction of Statelessness.

But Bautista said that the Philippines was not a signatory to the UN convention.

“There are only acts of compliance by the Philippine government to the convention but we are not a signatory so it never cured the statelessness of a foundling,” Bautista said.

According to House Minority Leader Ronaldo Zamora, however, being a foundling is not an issue against Poe.

“In the case of a foundling, it’s easy to say, ‘How do we know?’ But one rule of thumb is you cannot be a person who does not have a citizenship. You cannot be stateless. There are international conventions to that effect,” Zamora told House reporters, citing the Rohingya boat people.

He noted that Poe “was found practically within hours of being born.”

“How can you say she was a citizen of another country? The [baby was found still with its mother’s blood]. How can a foundling be stateless? What specific country is that? Clearly the Philippines. If she was not born here, how could she have arrived here?” Zamora asked.

Bayan Muna Rep. Carlos Zarate said one question that could be raised was whether Poe could be considered a natural-born Filipino because there was no way to ascertain the citizenship of her parents.

But the burden of proving that should fall on the accuser and not on Poe, Zarate said.

Zamora agreed: “It’s not for Senator Poe to establish that, but for the one impugning her citizenship.”

“From a political point of view, this is the worst issue you can raise. Foundlings also have rights. It’s as if they’re discriminating against foundlings,” Colmenares said.

At the San Juan news forum, Bautista said Poe could lose her seat in the Senate if a petition for quo warranto is filed and if a court or the Senate electoral tribunal rules that she is not a natural-born Filipino.

A quo warranto petition is a challenge to someone’s right to hold a certain office or position.

“A natural born citizen according to the Constitution is a Filipino citizen who does not need to perform any act in order to perfect Philippine citizenship,” Bautista said.

The Philippines follows the jus sanguinis principle of citizenship, he explained.

“If your parents or one of them is a Filipino, then you are a Filipino by blood,” he added.

Bautista explained that a foundling’s citizenship is hard to determine.

“We have to follow the law. It may be harsh for a foundling but what can we do?” he said.

In her May 2013 elections certificate of candidacy, Poe wrote that she was a “natural-born Filipino,” Bautista said.

“The proper legal remedy for that for anyone who cares to question would be a petition for a quo warranto to question her occupancy of the office because somebody else might be entitled to that,” he said.

Bautista said the candidate who ranked 13th in the 2013 senatorial election could be proclaimed duly elected senator because Poe was not qualified to run in the first place.

Asked why the issue was never taken up when Poe took office, Bautista said, “Perhaps nobody cared to raise it at that time.”

“When you are occupying a position as lofty as the presidency and vice presidency, we should be scrutinizing carefully the qualifications,” he added.—With a report from Kathrina Pineda