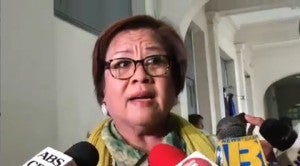 Justice Secretary Leila de Lima has given a special panel of prosecutors 30 days to determine whether or not there are enough evidence to merit the filing of criminal and administrative cases against people behind the Kentex factory fire which left 72 workers dead last month.

In a department order released on Wednesday, De Lima said the panel, which she created partly upon the instructions of President Aquino, would be composed of State Prosecutors Roberto Lao, Olivia Torrevillas and Ma. Cristina Barot as well as State Counsels Margarette Robles, Consuela Corazon

The team was tasked to review the reports of the Inter-Agency Anti-Arson Task Force (IATF) and Department of the Interior and Local Government, and other official reports on the fire in relation to the Revised Penal Code, Republic Act No. 9514, or the Revised Fire Code, Anti-Graft and Corrupt Practices Act, Revised Administrative Code, Civil Service Law and Local Government Code, among other regulations.

De Lima said that the panel would also “assess and evaluate the available documentary, testimonial, and object evidence so far gathered in the investigation and provided by the investigating agencies, and determine the sufficiency of the same in the filing of the appropriate cases.”

If it needs additional evidence for a case buildup, the team may coordinate with investigating agencies, specifically the IATF, she added.

De Lima said the panel should also identify the specific criminal and administrative offenses to be filed against private individuals and public officials and determine which would be filed in the Office of the Prosecutor, Office of the Ombudsman and other judicial bodies.

In addition, they will assist in the preparation of the complaints to be filed and should there be enough time, review and evaluate any evidence from the labor department on the possible administrative and criminal liabilities of Kentex Manufacturing Corp. under the labor code and other related laws.

Last Monday, President Aquino blamed local officials for granting Kentex a business permit and certificate of occupancy even though the company did not have a fire safety inspection certificate.

However, militant labor groups, including the Kilusang Mayo Uno said labor officials should also be held accountable since they gave Kentex a certificate of compliance in relation to occupational health and safety standards and general labor standards a few months before the factory fire.