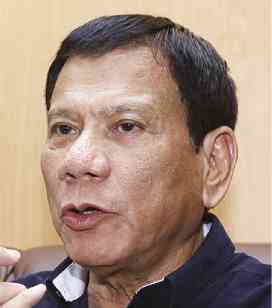 “This early, we are already seeing signs that the peace which we have promised to the Filipino people, especially those from Mindanao, may not come that easy,” Duterte said.

In his “listening tour” for his federalism campaign in the town of Sibalom in Antique on Monday, Duterte said railroading the approval of the BBL “will do more harm than good.”

“Does this mean that these eight provinces which earlier rejected their inclusion in the Moro autonomous region would now have to go through another plebiscite again to determine whether they would like to join the Bangsamoro Autonomous Region?” Duterte asked.

Duterte also mentioned the opposition of the Sultanate of Sulu in the planned inclusion of the sultanate in the new political entity.

“Let me repeat my warning that what is good for the Muslims of Central Mindanao, primarily the Maguindanaos, Maranaos, Iranuns and Kagans, may not be acceptable to the Tausugs, Yakans, and Samals. These are entirely two different Moro nations,” Duterte said.

The controversial mayor advised the Senate to critically review the BBL to ensure that its legislation would not create a string of fresh hostilities in Mindanao.

In its position paper submitted to the Senate, the government peace panel agreed that massive consultations is vital in making this peace deal an inclusive agreement.

“Like the Senate, we in the GPH Panel also believe that wide-based and meaningful consultations with various stakeholders constitute a significant foundation to sound public policy. It is, as it has always been our practice, consistent with the memorandum of instructions to us of His Excellency President Benigno Simeon Aquino III, to listen to and take heed from the widest possible constituency of concerned groups and individuals when it comes to the Bangsamoro proposal, in particular, and the larger peace process, in general,” the government peace panel said.

The government peace panel said it is unfortunate if some groups and individuals feel that they have not been consulted but at least 553 consultations were conducted since 2010 wherein substantial positions, information and opinions were gathered which were essential in the drafting of the BBL.

And for the concern of the Misuari faction, the peace panel said several convergence meetings and workshops were conducted with MNLF leaders since 2011 with the help of the Organization of Islamic Cooperation.

All parties involved also agreed that the GPH-MILF peace agreement should be in line with the Tripoli Agreement.

Duterte is campaigning for a shift from a unitary presidential form of government to a federal system. He is proposing for the creation of two separate Moro federal states including one for the Moros in the main island and another state for the island provinces.

Duterte served as an anti-terror adviser during the administration of President Gloria Macapagal-Arroyo, using his experience in keeping Davao City safe from major terror attacks.

Duterte was also a consultant to the National Democratic Front as a resource person in the peace process. ABC

Read Next
Mother of child-on-a-leash located; DSWD orders rescue of baby
EDITORS' PICK
Acer starts the year off strong with the Aspire Vero National Geographic Edition
The best of bayside and city living at SMDC’s Sail Residences
EDITORIAL: Protecting the polls’ integrity
COVID-19 virus spread slowing down in Metro Manila, says OCTA Research
Over 3 Million worth of prizes to be won at Smart Padala’s SENDali Manalo Promo!
Comelec junks petition to scrap Bongbong Marcos COC
MOST READ
Drug lord Espinosa tried to escape through air vent at detention facility – NBI
In Batanes, octogenarian dies of COVID-19
When to get boosters after positive COVID test
Marcos Jr. visits Cebu, stands as ‘ninong’ to mayor’s son
Don't miss out on the latest news and information.