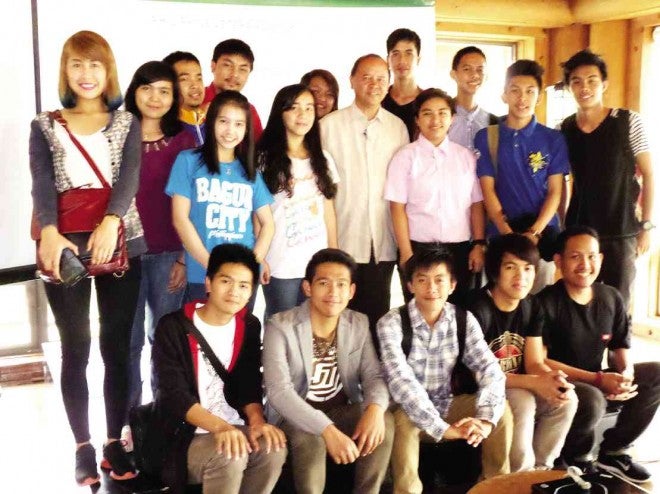 For many Filipinos, probably including many Baguio City residents, the Philippines’ Summer Capital’s role in World War II (WWII) is no more than a side story, even though the surrender papers that ended the conflict were signed there.

Most accounts of WWII focus on battles in Manila, Bataan and Corregidor and the American landing in Leyte and Lingayen, Pangasinan, to reclaim the Philippines.

Probably in the minds of many, Baguio was just a place for rest and recreation (R&R), with its cool climate and amenities, for the invading Japanese forces as it was for the Americans.

But Dr. Ricardo T. Jose, professor of history at the University of the Philippines Diliman in Quezon City and the country’s foremost scholar on WWII, told his audience during a recent lecture at the City of Pines’ Camp John Hay Golf Club that Baguio was where the war in the Philippines really began and where it ended.

Students of St. Louis University (SLU) helped underscore Baguio’s importance during the war as they recounted stories from grandparents and other relatives about how the uplanders contributed to the war effort.

Jose’s lecture on “Reexamining World War II in the Philippines” was organized by the Philippine Veterans Bank, with the Baguio City government, to mark Baguio’s liberation 70 years ago on April 27.

Some 60 teachers and city government employees and about 20 students attended.

Jose said Baguio experienced the first Japanese air raid on Luzon when the Pacific War started. “Baguio had great military and political importance and thus [figured] prominently during the war.” 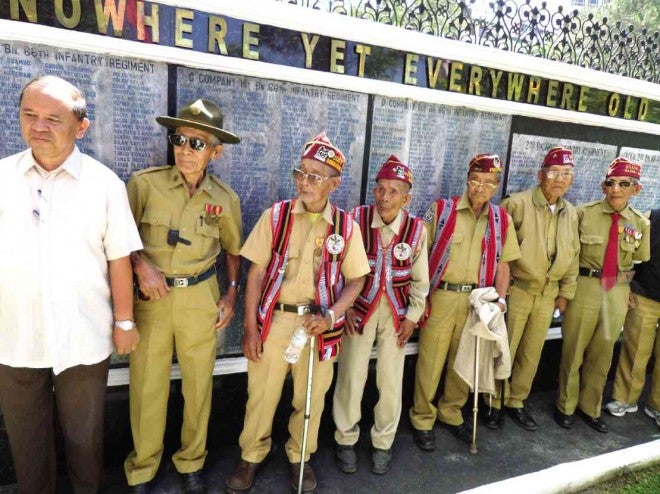 Veterans, with Jose, stand in front of a wall listing the names of Baguio and Cordillera WWII fighters.

He said, “When the war started, the President of the Philippine Commonwealth, Manuel L. Quezon, was in Baguio; toward the end of the war,

Quezon stayed in Baguio periodically and the American high commissioner, direct representative of the United States government in the Philippines during the Philippine Commonwealth years, had his own residence inside Camp John Hay.

Economically, Baguio was booming, with many expatriates opening businesses on Session Road and other major streets. Mines around the city were also productive, drawing workers from the lowlands. 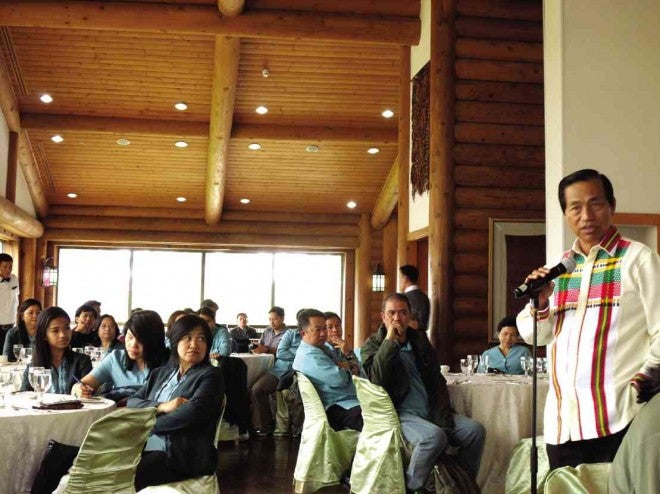 DOMOGAN says the country should commemorate Sept. 3, the date of the Japanese’s formal surrender.

Baguio, known as the country’s summer capital, had its own strategic military value, Jose said. The US Army had a small garrison in Camp John Hay and there were two Philippine Army camps in the city itself: Camp Henry T. Allen, which had been the site of the old Philippine Constabulary Academy in earlier years, and Teachers’ Camp, temporary home of the Philippine Military Academy.

There was also the Philippine Constabulary detachment at Camp Holmes (now Camp Dangwa).

Jose said Japanese planes bombed Camp John Hay, “in the first overt attack on Luzon,” soon after the bombing of Pearl Harbor in Hawaii that started the Pacific War.

The city would become one of the most destroyed Philippine cities, “perhaps second only to Manila,” he said, although the destruction was caused more by American bombardment during liberation.

The Japanese targeted Baguio probably because they thought Gen. Douglas MacArthur, field marshal of the Philippine Army, and American fighter pilots were there, Jose said.

Even as the Japanese military tortured suspected enemies, the invading forces also launched a parallel propaganda blitz—reopening schools, teaching the locals the Japanese language, among other things. Names of some streets were changed from American to either Japanese or Igorot, Jose said.

When the US troops returned, Baguio was again targeted by the first air raid on Jan. 6, 1945. In the following days, US planes bombed City Hall, Session Road and other parts of town. Bigger planes were sent in February and March. A bomb dropped in front of the cathedral killed many civilians who sought shelter there. 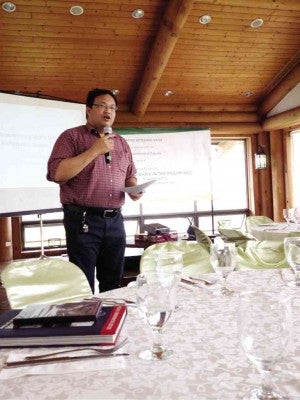 On Sept. 3, 1945, a date which Baguio City Mayor Mauricio G. Domogan said should be commemorated by the nation, Gen. Tomoyuki

Yamashita, commander of the Japanese military forces in the Philippines, signed the surrender documents at the American high commissioner’s residence in Camp John Hay, formally ending the war.

In the question-and-answer part of the lecture, several SLU third year students, pursuing Bachelor of Science in Education, major in Social Studies, degrees, supplemented Jose’s account of the war in Baguio with stories they heard personally from survivors.

Two generations removed from WWII, the students recalled stories or sought confirmation from Jose about what they had heard from grandparents and other relatives.

One student asked about the women’s involvement in the resistance movement, having heard from his grandmother that she carried messages for the guerrillas.

Jose said women did more than transmit messages. Many fought on the front line with men.

To another student’s question if the Japanese regime was truly the “Golden Age of Philippine Art,” Jose replied Japan had a cultural policy for the country, which included teaching Filipino as the national language.

But the Golden Age was more pronounced in Manila, which saw the birth of many publications and a flourishing of Tagalog literature.

Stage shows or vaudevilles became popular as there were no Hollywood movies, Jose said.

Another student related her grandfather’s story about how familiarity with the terrain enabled the guerrillas to elude pursuing Japanese soldiers.

The locals simply took the most circuitous routes, climbing hills and mountains, to lose their pursuers. “The Japanese had the weapons but they did not have the stamina,” the student was told by her grandfather.

Jose agreed with another student that Filipino fighters were the first to put pressure on Yamashita to make him surrender.

“Yamashita was surrounded by Filipinos, but he did not want to surrender to them (fearing reprisal for Japanese atrocities),” Jose said. The general had to be protected by American soldiers.

In response to another student’s question on why Japan entered WWII, Jose said it was because of economic necessity. Japan needed to secure steady supplies of important resources.

With the new information Jose provided on Baguio’s strategic importance during WWII, the session ended with a suggestion from a member of the audience for the history professor to write a WWII book focusing primarily on the Summer Capital.