A new life for the hearing-impaired through education

Schooling seemed like a distant goal not so long ago for Ramsey Remoroza, who will be in Grade 2 this new school year.

Remoroza’s parents knew their son, born with a hearing problem, would need to go to a special school that could address his specific needs.

But the parents also knew they did not have the resources to get their son the expert help he needed.

Emmanuel, Remoroza’s father, works in a supermarket near their house while his mother, Jennifer, is a full-time homemaker.

Undaunted, Jennifer looked for ways to help her son. She tried to find people who could at least provide him a hearing aid.

Then Remoroza’s grandmother, a barangay sweeper in a private subdivision in Quezon City, discovered the Maria Lena Buhay Memorial Foundation (MLBMF), an oral school for children with hearing disabilities that offers speech therapy and a complete educational program.

The country’s first oral school, the nonprofit, nonstock MLBMF has become a leading institution in the field of special education.

Though the school now accepts students from more privileged backgrounds, it was originally established to provide opportunities for the underprivileged to be productive members of society.

Remoroza was brought to MLBMF and was screened by the school’s executive director, Leticia Nietes-Buhay, a speech therapist with a master’s degree in Speech Therapy from University of Illinois. 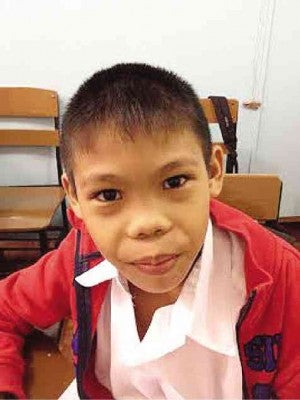 To his parents’ relief, Remoroza was accepted as a scholar, the educational subsidy supported by government agencies and private individuals that believe in MLBMF’s mission.

Jennifer recalled that it was not until her son was 3 years old that they found out he was deaf.

“We didn’t have any idea about his disability,” she said in Filipino. There was no hearing screening for newborns at Ospital ng Makati, where she gave birth.

The parents suspected their son had a problem when they noticed speech and language delay.

They brought Remoroza to the Philippine General Hospital, which, after hearing screenings, confirmed the parents’ suspicion. Remoroza was found to have moderate-to-severe bilateral hearing loss.

Now, after five years at MLBMF, Buhay said Remoroza had improved a lot. “His speech has improved and his social skills were developed,” she said.

MLBMF was founded in 1987 in honor of Buhay’s daughter, Maria Lena, or Lenlen, a Psychology student at Ateneo de Manila University who died of leukemia.

Being nonprofit, the school relies on sponsorships, donations and tuition from paying students.

The school started with 10 students and three teachers, including Buhay, “Teacher-Mom” to students. By the end of its first school year, the school had an enrollment of 26 students.

“But now, the school has to limit the number of students and grade levels, because Teacher-Mom started getting sick due to too much work,” Buhay laughingly said.

The school limits enrollment to only a few students from preschool to Grade 4. A new grade level is added every year.

Buhay said children who enrolled at MLBMF from nursery could “easily integrate into mainstream schools after two to three years with us.”

She said the school had succeeded in teaching children with hearing impairments how to talk, to understand, to read and to live like hearing people.

One of the school’s main accomplishments, she said, was showing parents that sign language was not the only option for hearing-impaired children.

“One of the advantages of a speaking person with a hearing impairment is gaining employment,” she said.

Buhay said the school had produced successful graduates, some were managing their own businesses, others were working abroad or in big companies in the Philippines.

“Our graduates are now productive citizens, despite their disability,” she said.

But the school is continuously in search of funding to continue its work although it has been lucky to find several generous benefactors.

The school accepts donations for full and partial scholarships.

Buhay said they wanted to accept more children and provide hearing aids for kids whose families could not afford to buy them.

This school year, aside from hearing-impaired children, MLBMF will accept a limited number of students with mild learning disabilities as part of its Inclusive Education Program. It will also launch its English Language Speech Tutorial and Therapy Program.