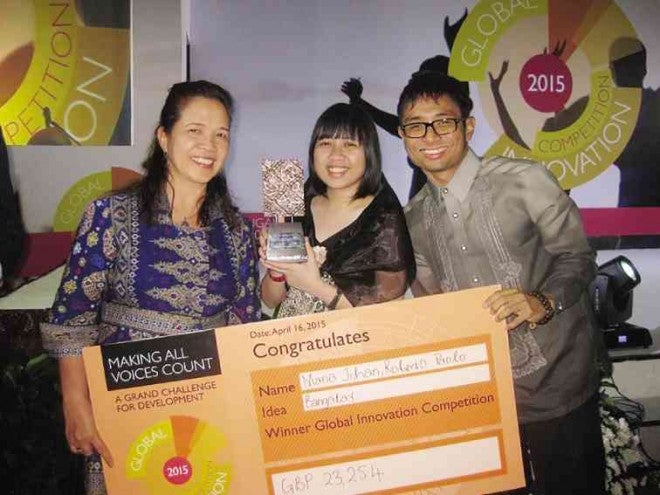 A disaster information system that drew from lessons learned during the eruptions of Mount Mayon in the Bicol Region and Mt. Pinatubo in Central Luzon topped the gold category in the recent 2015 Global Innovation Competition in Jakarta.

The Filipino team of cousins Frei Sangil, 23, and Paolo Sangil, 25, with Shiela Marabulas-de los Santos and Lou Xavier Lauraya, will receive a grant from the development consortium Making All Voices Count to jump-start their project Balangay.

The grant would be sourced from a pool of 300,000 British pound sterling, Making All Voices Count said in its website.

Pakistan, Kenya and Ghana won the silver while Indonesia and Bangladesh received the bronze.

On its website, Making All Voices Count said the 10 finalists, chosen from among 241 proposals from 12 countries in Africa and Asia submitted during the six-month search, provided innovative solutions in promoting transparency, fighting corruption and empowering marginalized groups.

The Philippine team described project Balangay as an “open, cloud-based information system that aims to improve the implementation and accountability of disaster preparedness, response and relief actions in the Philippines.”

It is also designed to educate people on disaster preparedness and risk-avoidance.

The project was named after a large boat in precolonial Philippines, from which the Filipino term for village, “barangay,” was also derived, said Ma. Teresa Briones, a member of the jury.

Briones, director of the disaster response and emergency assistance management bureau of the Department of Social Welfare and Development, will mentor the winning team in citizen-government engagement.

Project Balangay, the team said, “brings together a range of stakeholders, including the government, to create a public resource on disaster information and provide a functioning forum for reliable communication between local government units, [nongovernment organizations] and communities in emergencies.”

Frei, 23, pitched Balangay to the judges by saying, “If you want to inform disaster management policies, you must ask the people. Who knows disaster better than the people who have experienced it?”

Bantayan is a collection of simplified risk assessment tools, like maps, to help citizens prepare for floods, earthquake, lahar, eruptions and other hazards.

Bayanihan is a platform for community communication and monitoring, including public-donation tracking and citizen feedback.

D-Learning helps users understand hazards and how to get out of harm’s way.

“Balangay aims to reach everyone [so] we make Balangay as simple and as user-friendly as possible. Our user interface is simple and straightforward. We make Balangay available in the local language, for those who cannot understand English or Tagalog. Balangay’s centralized, consolidated design makes it easy for users to get the appropriate links and information related to the disaster or place they are concerned about,” the team explained.

Team members drew from personal experience in developing their project.

Frei lives near Mt. Mayon. “I have lived most of my life [at risk of] disaster,” said the developer of mobile applications, mostly on artificial intelligence and learning.

Mayon in Albay province is considered the country’s most active volcano, erupting 49 times in 400 years. Last year, a lava dome on the Mayon summit and rising magma prompted the evacuation of 12,000 families.

Paolo, the project’s communication director, who focuses on the development of learning materials, was only 3 years old when Mt. Pinatubo erupted. He learned of the menace of lahar (volcanic sediments washed down by rains) through detailed accounts of relatives in Pampanga province.

Pinatubo’s eruption in 1991 was the second largest explosion of the 20th century, ejecting 10 square kilometers of magma and 22 million tons of sulfur oxide, forcing the evacuation of 1.3 million people in the provinces of Pampanga, Tarlac and Zambales. Lahar flows in the rainy months until 1997 buried villages and altered the topography of the region.

Marabulas-de los Santos’ work with the Social Action Center of Pampanga involved her in relief operations, relocation and resettlement programs.

Lauraya, a rescue specialist, first worked as a social worker in far-flung Bicol areas, assisting oppressed women, abuse victims, children and the elderly. He currently works as a fire officer at the Bureau of Fire Protection in Bicol.

The gold-winning project of Mozambique, Face2Face, wants to use the social media, community radio and information communication technology to track the experiences of people using the country’s new Right to Information Law to obtain public information.

Nigeria’s BudgIT follows the success of its own www.tracka.ng site that measures government performance in rural and urban areas.

The Indonesia team’s project seeks to increase women representation in local policy making that is guaranteed by the new Village Law.