Myanmar says it’s not to blame for migrant crisis 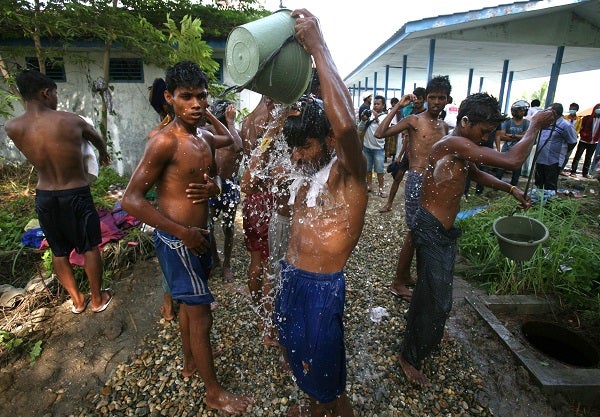 Ethnic Rohingya men take showers outside their temporary shelter in Langsa, Aceh province, Indonesia, Saturday, May 16, 2015. Boats filled with more than 2,000 desperate and hungry refugees from Myanmar and Bangladesh have arrived in Thailand, Malaysia and Indonesia in recent weeks, and thousands more migrants are believed to be adrift at sea after a crackdown on human traffickers prompted captains and smugglers to abandon their boats. AP

YANGON, Myanmar — Myanmar refused to shoulder the blame for an escalating crisis involving thousands of persecuted Rohingya Muslims stranded at sea, and doubts whether it will attend a regional meeting in Thailand later this month to find an urgent solution on how to deal with the boats of refugees.

Boats filled with more than 2,000 desperate and hungry people have landed in Indonesia, Malaysia and Thailand, and thousands more  migrants  are believed to be adrift at sea after a crackdown on human traffickers prompted captains and smugglers to abandon their human cargo.

All three countries have dispatched their navies to push boats away or execute a so-called “help-on” policy of giving the boats food and water — and pointing them to other countries.

The  migrants  are Rohingya Muslims fleeing persecution in predominantly-Buddhist Myanmar, and Bangladeshis looking for a better life abroad.

“We are not ignoring the  migrant  problem, but our leaders will decide whether to attend the meeting based on what is going to be discussed,” said Maj. Zaw Htay, director of the office of Myanmar’s president. “We will not accept the allegations by some that Myanmar is the source of the problem.”

He directed some of the blame on Myanmar’s neighbors, saying that from a humanitarian point of view, “it’s sad that these people are being pushed out to sea by some countries.”

The  migrants  seem intent on reaching Malaysia, a Muslim-majority country that has hosted more than 45,000 Rohingya over the years but now says it can’t accept any more. Indonesia and Thailand have voiced similar stances.

Thailand has organized a May 29 meeting with officials from 15 countries to discuss the “root causes” of “irregular migration in the Indian Ocean.”

Zaw Htay said Friday that Myanmar’s government “will not attend a regional meeting hosted by Thailand if ‘Rohingya’ is mentioned on the invitation.” He accused governments of trying to divert their human smuggling and slavery problems by dumping the blame on Myanmar.

On Saturday, he said an official invitation still had not arrived.

“The gravest violation of human rights are committed by those corrupt officials who are involved in human trafficking activities and colluded with the trafficking syndicates,” Zaw Htay said.

Thai authorities, long accused of turning a blind eye to human trafficking in exchange for pay, launched a crackdown May 1 after finding dozens of bodies buried at traffickers’ jungle camps on Thailand’s border with Malaysia. Dozens of Thai officials were arrested and more than 50 police are under investigation for complicity.

The U.N. calls the Rohingya one of the world’s most persecuted minorities. For decades, the Rohingya suffered from state-sanctioned discrimination in Myanmar. Denied citizenship by national law, they are effectively stateless.

In the last three years, attacks on Rohingya have left hundreds dead and sparked an exodus of an estimated 120,000 people who have boarded human traffickers’ boats to flee to other countries. The flight helped fuel a longstanding human smuggling industry in the region.

Even the name Rohingya is taboo in Myanmar, which calls them “Bengalis” and insists they are illegal immigrants from Bangladesh, even though Rohingya have lived in the predominantly Buddhist Southeast Asian country for generations.

1,000 survivors of violence, hunger at sea land in SE Asia

Read Next
Binay warns entrusting PH to inexperienced leaders
EDITORS' PICK
SM continues to send relief assistance to remote towns in Batangas
Museums ‘put to sleep,’ churches closed amid volcano’s unrest
Get exciting deals and discounts when you download the new McDonald’s App
Seventh judge assigned to handle De Lima case
PH preps for China virus: Question of when, not if
Beyond water service: Maynilad builds massive infrastructure projects to clean up Metro Manila waterways
MOST READ
Passengers from Wuhan, China to be flown out of Kalibo, Aklan – CAAP
Part of Aurora Boulevard in Cubao closed from Jan. 25 – Feb. 1
Lacson on Duterte’s threat to end VFA over Bato’s canceled visa: Where is the connection?
Seventh judge assigned to handle De Lima case
Don't miss out on the latest news and information.