Bay of Bengal migrant crisis: the boats and the numbers 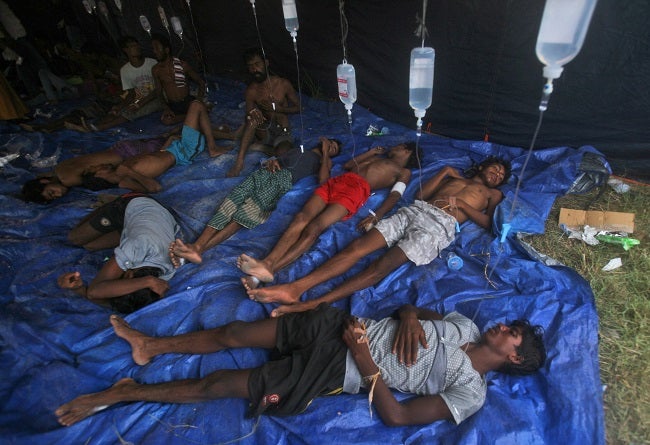 Newly arrived migrants receive medical treatment under a makeshift tent at Kuala Langsa Port in Langsa, Aceh province, Indonesia, Friday, May 15, 2015. More than 1,000 Bangladeshi and ethnic Rohingya migrants came ashore in different parts of Indonesia and Thailand on Friday, becoming the latest refugees to slip into Southeast Asian countries that have made it clear the boat people are not welcome. AP

BANGKOK, Thailand—In recent days nearly 3,000 boat people from Myanmar and Bangladesh have been rescued or swum to shore in Malaysia, Indonesia and Thailand.

Several thousand more are believed to remain trapped on boats at sea with little food or water in a crisis sparked by smugglers abandoning their human cargo that is believed to follow a Thai crackdown on the trade.

The UN refugee agency believes an estimated 25,000 Rohingya and Bangladeshis have taken to boats in the first three months of this year — double the number over the same period in 2014.

The following is a regional summary of the current “boat people” crisis:

More than 1,100 migrants have washed ashore in Malaysia over the past week after people-smuggling gangs dumped migrants in shallow waters off the coast of the resort island of Langkawi.

Some migrants swam to shore after harrowing month-long journeys at sea, crammed in with hundreds of other people and few supplies.

Malaysia’s Prime Minister Najib Razak has joined Thailand in calling on Myanmar — where many boats carrying migrants from the persecuted Rohingya minority originate — to help address the burgeoning “humanitarian catastrophe”.

Myanmar has so far refused to acknowledge its role in the crisis.

Around 1,500 migrants have been intercepted by Indonesian authorities or plucked from the sea — many in a desperate condition.

On Friday around 900 Bangladeshis and Rohingya migrants were rescued from the sea after their boat sank off the east coast of Sumatra.

Survivors told of people being thrown overboard in fighting over dwindling food supplies. Some of the Bangladeshis on board said they had been kidnapped and taken to sea.

A second vessel carrying about 400 migrants was spotted the following day by Indonesian navy vessels. The boat was damaged but afloat and its captain had fled.

Indonesia’s navy provided the boat with fuel and then towed it out of their waters, declining to say if it was heading to Malaysia, its suspected destination.

On Thursday a boat carrying an estimated 300 Rohingya migrants was found adrift several kilometres off the Thai tourist resort of Koh Lipe.

Authorities dropped food and water into the sea from a helicopter, prompting a desperate scramble to retrieve the packages.

Some of the visibly-weak migrants said they wanted to go to Malaysia and the Thais fixed their broken engine and pointed them south.

But the boat was still drifting on Saturday in between Thai and Malaysian waters, with neither country seemingly keen to let them make shore.

On Friday around 100 migrants from a separate boat made it to land in southern Thailand.

Advocacy groups believe there may be several other boats in the vicinity, with people smugglers believed to be among the passengers.

Since May 1 some 250 migrants from Bangladesh and Myanmar have been found in jungle camps in the southern Thai province of Songkhla, bordering Malaysia.

Coastal towns along Bangladesh’s Cox’s Bazaar district and Myanmar’s Rakhine State are the starting point for most migrant journeys.

A trawler with 116 Malaysia-bound migrants was found adrift off a small island, near the Myanmar border.

Small vessels carry migrants out to larger “cargo” boats moored in international waters, which head towards Southeast Asia when full.

Chris Lewa of Arakan Project, a group advocating for the rights of Rohingya, said her contacts had told her that five cargo vessels left in early May headed east.

Two remain moored in the Bay of Bengal but are not thought to be taking on any more people at the moment, she added.

Police have killed several key players in the trade, while dozens of lower level people smugglers have been rounded up.