1,000 survivors of violence, hunger at sea land in SE Asia 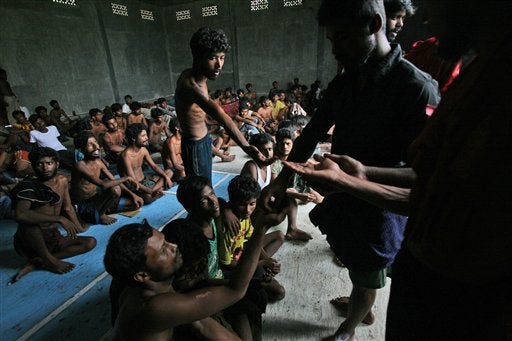 A migrant distributes sweets to others after their arrival at Kuala Langsa Port in Langsa, Aceh province, Indonesia, Friday, May 15, 2015. More than 1,000 Bangladeshi and ethnic Rohingya migrants came ashore in different parts of Indonesia and Thailand on Friday, becoming the latest refugees to slip into Southeast Asian countries that have made it clear the boat people are not welcome. AP

LANGSA, Indonesia — More than 1,000 people fleeing persecution in Myanmar and poverty in Bangladesh came ashore around Southeast Asia, describing killings, extortion and near-starvation after surviving a harrowing journey at sea.

The waves of weak, hungry and dehydrated migrants who arrived Friday were the latest to slip into countries that have made it clear they’re not welcome. But thousands more are still believed stranded at sea in what has become a humanitarian crisis no one in the region is rushing to solve.

Most of the migrants were crammed onto three boats that Indonesian fishermen towed ashore, while a group of 106 people were found on a Thai island known for its world-class scuba diving and brought to the mainland.

“If I had known that the boat journey would be so horrendous, I would rather have just died in Myanmar,” said Manu Abudul Salam, 19, a Rohingya from Myanmar’s Rakhine state where three years of attacks against the long-persecuted Muslim minority have sparked the region’s largest exodus of boat people since the Vietnam War.

Manu was aboard the largest boat to come ashore Friday, a wooden vessel crammed with nearly 800 people that was towed to the Indonesian village of Langsa in eastern Aceh province.

The vessel was at sea when authorities around the region began cracking down on human trafficking two weeks ago. Aid groups and rights workers have warned that the crackdown prompted some captains and smugglers to abandon their ships and leave migrants to fend for themselves — a claim that was corroborated by survivors who came ashore Friday.

Manu said she watched the captain on her ship fleeing on a speed boat several days ago after apparently receiving a call on his cell phone. Before he left, he destroyed the boat’s engine, she said, and the boat began to drift.

With food and water running out, tempers flared and fighting broke out, Manu said, sobbing, saying that her 20-year-old brother was among dozens killed in violent clashes between the Bangladeshis and Rohingya on board.

“They thought the captain was from our country, so they attacked us with sticks and knives,” she said, sobbing. “My brother is dead.” The bodies of the dead were thrown into the sea, she said.

A 19-year-old Bangladeshi survivor, Saidul Islam, also said that dozens died on the ship from starvation and injuries after fighting broke out following the captain’s evacuation. His voyage lasted three months, starting when a man turned up at his village and asked if anyone wanted a boat ride to Malaysia, known for better job prospects. But once at sea, the captain demanded hundreds of dollars and made the men call their families to secure payment. There were also beatings aboard the vessel, which was stifling hot and cramped.

“We could not stand up. When we asked for water, the captain hit us with wire,” he said.

Southeast Asia for years tried to quietly ignore the plight of Myanmar’s 1.3 million Rohingya but is now being confronted with a dilemma that in many ways it helped create. In the last three years, more than 120,000 Rohingya have boarded ships to flee to other countries, according to the UN refugee agency.

No countries want them, fearing that accepting a few would result in an unstoppable flow of poor, uneducated migrants. But Southeast Asian governments at the same time respected the wishes of Myanmar at regional gatherings, avoiding discussions of state-sponsored discrimination against the Rohingya.

Myanmar, in its first official comments as the crisis escalated in the past two weeks, indicated it won’t take back migrants who claim to be Rohingya, who are denied citizenship in Myanmar and are effectively stateless.

“We cannot say that the migrants are from Myanmar unless we can identify them,” said government spokesman Ye Htut. “Most victims of human trafficking claim they are from Myanmar is it is very easy and convenient for them.”

Another official, Maj. Zaw Htay, said that Myanmar “will not attend a regional meeting hosted by Thailand if “Rohingya’ is mentioned on the invitation.” Even the name is taboo in Myanmar, which calls them “Bengalis” and insists they are illegal immigrants from Bangladesh, even though Rohingya have lived in the majority-Buddhist country for generations.

Thailand has convened a meeting of senior officials for May 29, but the Myanmar officials’ comments show the difficulty in resolving the crisis.

The deputy spokesman for the UN secretary-general, Farhan Haq, told reporters Friday that Ban Ki-moon plans to speak with regional leaders to urge them to put human lives first in the migrant crisis. “We don’t want them, in other words, to be in floating coffins,” Haq said.

Most of the migrants are believed to be heading to Malaysia, a Muslim-majority country that has hosted more than 45,000 Rohingya over the years but now says it can’t accept any more. Indonesia and Thailand have voiced similar stances.

Earlier this week, about 1,600 migrants were rescued by the Malaysian and Indonesian navies, but both countries then sent other boats away. It wasn’t clear whether those who came ashore Friday had been turned away earlier.

READ: Malaysia turns away boat with more than 500 migrants

The UN’s top human rights official said it was “incomprehensible and inhumane” to turn the boats away.

“I am appalled at reports that Thailand, Indonesia and Malaysia have been pushing boats full of vulnerable migrants back out to sea,” said Zeid Raad al-Hussein, the UN high commissioner for human rights. “The focus should be on saving lives, not further endangering them.”

The International Organization for Migration called on regional governments to help and said it was releasing $1 million to help migrants on shore and still stranded at sea. Director General William Lacy Swing said the IOM would assist with longer-term problems like transportation and living arrangements, “but in the name of humanity, let these migrants land.”

As boats arrived in scattered spots of Indonesia and Thailand on Friday, it was increasingly clear that nobody knows how many boats are adrift or where.

The boat that Manu was on was crammed with about 790 people, including 61 children and 61 women, many weak from lack of food and water, said Lt. Col. Sunarya, who uses only one name. Fishermen spotted the boat on the verge of sinking.

“Some of the people told police they were abandoned at sea for days and Malaysian authorities had already turned their boat away,” said Sunarya, a Langsa police chief.

Authorities in Langsa provided basic shelter for the migrants in two large warehouses, and residents came to donate food, drinks and clothing. More than 50 people were treated for dehydration and injuries, according to Syamsul, an official at the Langsa General Hospital.

In neighboring North Sumatra province, fishermen rescued a third boat with 96 weak and hungry people adrift in a motorless boat, said Capt. Suroso of the Langkat district police. They were provided basic shelter and food, he said.

Separately, the Thai navy found 106 people, mostly men but including 15 women and two children, on a small island off the coast of Phang Nga province, an area known as the Surin Islands and famous for its scuba diving. They were brought to a police immigration facility on the mainland.

“It’s not clear how they ended up on the island,” said Prayoon Rattanasenee, the Phang Nga provincial governor. The group said they were Rohingya from Myanmar. “We are in the process of identifying if they were victims of human trafficking.”