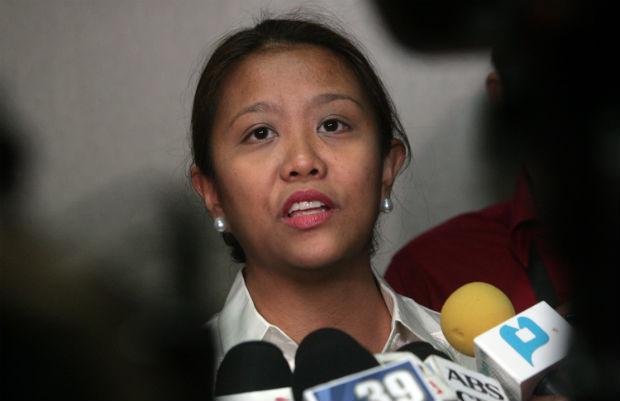 Senator Nancy Binay said the remaining balance in the five bank accounts owned by her father, Vice President Jejomar Binay, would not even reach P1 billion.

The Vice President himself said in a statement Thursday that only five accounts under his name were included in the freeze order reportedly issued by the Court of Appeals (CA) last Monday, May 11 on a petition by the Anti-Money Laundering Council .

But while she said she was not aware of the details of the five accounts, Senator Binay said she was certain that it would not reach billions of pesos as reported in the media.

READ: AMLC: Binay huge withdrawals made almost at same time as deposits
“Yun ang sigurado ako na wala, walang billion dun sa five accounts (I am sure that there is not a billion peso in the five accounts),” she told reporters in an interview at the Senate Thursday.

The senator clarified that she was only referring to the remaining balance of the accounts at that time the deposits were reportedly frozen by the CA.

(I am not aware of all the transactions. I am not sure if the account he used in the 2010 elections was also included in the freeze order so it’s hard for me to speculate. But if what you’re saying is that he has billion remaining balance in those bank accounts, I think that’s just used to shock the people.)

But asked if it would not be surprising if her father has millions of pesos in the banks, the senator said:  “I think meron, kasi medyo masinop ‘yun e. May alkansya nga ‘yun,  nag iipon ‘yun ng coins (I think he has because he is quite thrifty. He has a piggybank and he saves even the coins),” the senator added. IDL