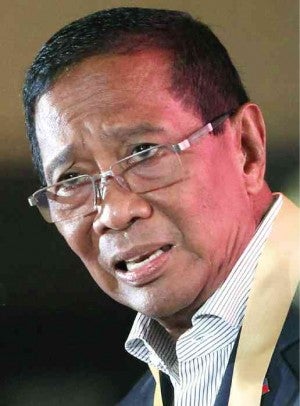 BELEAGUERED BINAY The Court of Appeals has ordered a freeze on some 200 bank accounts and other assets of Vice President Jejomar Binay, shown here during a press conference at the Makati Sports Club in December last year. JOAN BONDOC

The Court of Appeals (CA) has granted a petition by the Anti-Money Laundering Council (AMLC) to freeze the bank accounts of Vice President Jejomar Binay totaling P600 million.

The order was issued in connection with the investigations being conducted by the Office of the Ombudsman on alleged irregularities in the construction of the Makati City Hall Building II, purportedly overpriced at P1.3 billion, and Makati Science High School. A copy of the order was secured by the Inquirer.

“The ex parte petition for the issuance of a frozen order is granted. A freeze order is hereby issued valid and effective immediately for a period of six months,” said the order by the CA’s First Division. It said Binay’s accounts in banks, insurance and securities companies should be frozen “wherever they may be found.”

The AMLC petition stemmed from complaints filed by Nicolas Enciso VI and Renato Bondal—former barangay (village) captains in Makati—in the Office of the Ombudsman. 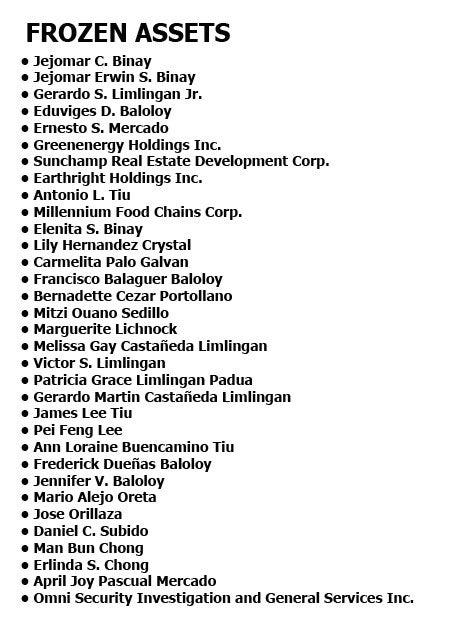 In all, the court order covers 242 banks, securities and insurance accounts of the respondents. The P600 million covered only accounts under Binay’s name. In all, the transactions conducted by Binay, his family and alleged dummies examined by AMLC totaled P16 billion since 2008.

The court said it agreed with the AMLC that there was “probable cause to believe that the individual and joint bank accounts of investments made by, and insurance policies issued” to Binay, his son and associates were “related to unlawful activities.”

The order was based on the findings of the National Statistics Office, claims by Enciso and Bondal that the parking building was overpriced by more than P1.3 billion, Mercado’s testimony in the Senate on his alleged cash deliveries to Junjun Binay and his father’s allies and purported dummies, and statements of assets, liabilities and net worth (SALNs) that showed incomes from 2007 to 2013 of the Binays to be “disproportionate to the values, frequency and complexity of their banking transactions.”

The records of the Securities and Exchange Commission (SEC) showed probable links of entities, their directors and officers to the Vice President and his family, the court said.

Mercado’s testimony was corroborated on material points by the records of the SEC and the financial investigations conducted by the AMLC, the court said.

Limlingan, Baloloy and other persons associated with the Vice President made large and frequent transactions soon after the Senate blue ribbon subcommittee conducted hearings into Binay’s alleged shenanigans. Massive withdrawals of funds and pretermination of investments, among others, were made after the Senate began the hearings.

“Taking into consideration that the advanced state of technology of the electronic banking system allows for the closure of bank accounts or transfer of funds in a matter of seconds, the averment of the AMLC that there is an imminent danger that the funds in the subject bank accounts, investment and insurance policies will be withdrawn, transferred, concealed or otherwise disposed of is well taken,” the court said.

The results of the initial investigation conducted by the AMLC already indicate a pre-termination of investments as well as withdrawals and transfers of large amounts of funds from bank accounts sought to be frozen, it said.

“In the light of the foregoing and the sheer number of monetary instruments involved and the AMLC’s declaration that it still needs to conduct further financial investigation for the possible filing of appropriate legal actions against the respondents, we find the issuance of a freeze order, effective for a period of six months against the aforementioned bank accounts, insurance, policies and investments warranted,” the court said.

Binay camp: LP to use AMLC report to continue demolition job vs VP