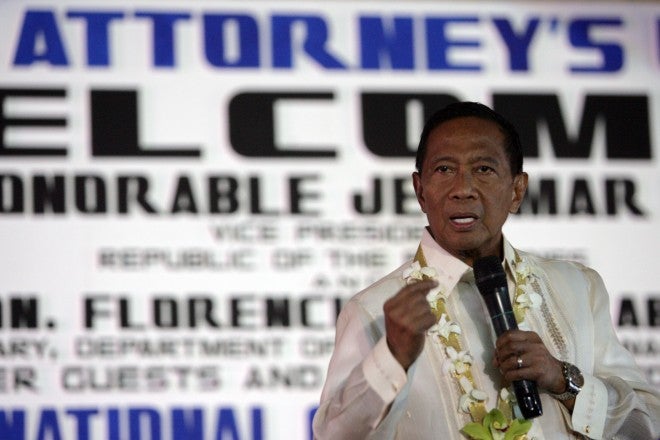 Vice President Jejomar Binay broke his silence on Thursday, saying he had no “hidden wealth” and that his money came from legitimate sources.

(I don’t have 242 accounts. Only five accounts in the freeze order are under my name. The funds in these five accounts are legal and did not come from hidden wealth. The AMLC is wrong.)

AMLC is Anti-Money Laundering Council, which reportedly submitted a report to the   Court of Appeals indicating that the bank deposits under the Vice President’s name, alleged dummies and his son, Makati Mayor Jun-Jun Binay, have reached P11 billion since 2008.

Citing the errors in the AMLC report, the Vice President said that his assets did not only come from his salary as a government official but also from his businesses.

(The AMLC said that the source of my funds only came from my salary, so it did not match the amount of money in my bank accounts. That is false.)

(Also included in my accounts were my earnings from transactions before I even entered government work. I’ve also had businesses for decades. I also pay my taxes. Even the legal campaign contributions which I reported to Comelec were tagged by AMLC as hidden wealth. But the AMLC is mistaken.)

Binay said the AMLC report was wrong because it also included accounts that were already closed.

(They are making it appear that I own the other 237 accounts and transactions of other people. That is not true and just made up. The AMLC is really mistaken.)

The Vice President said the release of the AMLC report was part of a “conspiracy”  to  destroy him and derail his presidential bid in 2016.

He said that it was also clear that the release of the AMLC report was in violation of the law, saying it was “one-sided” and did not include the explanation of the parties involved.

“Malinaw sa paglalabas ng report ng AMLC na handa ang mga kalaban ko na labagin ang batas para lang siraan ako (It is clear that with the release of the AMLC report that my rivals are open to bending the rules of just to destroy my reputation),” Binay added. IDL