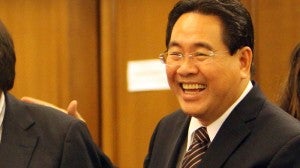 FOR warning Congress against a watered down version of the Bangsamoro basic law, the Moro Islamic Liberation Front got this dare from a congressman: “Take it or leave it.”

Cagayan De Oro Rep. Rufus Rodriguez, who heads the ad hoc Bangsamoro committee at the House of Representatives, was reacting to the MILF’s earlier pronouncements in an editorial posted on its website cautioning Congress that “hesitancy” in passing the BBL may result in “complications.”

“The government should not be threatened of a war. Takot na tayo eh, 43 years (of Muslim secessionist movement) na tayong takot… If they will not accept it, that is their concern,” he added.

He said the panel left intact articles on the powers of the Bangsamoro government and fiscal autonomy, and that should be enough for the Moro group to accept the amended BBL.

It also scrapped the provision that allows contiguous areas to be placed under the Bangsamoro entity upon a petition of at least 10 percent of its registered voters, as this may amount to creeping territorial expansion.

“Ultimately, I believe they will be accepting this. If not, what will we do? It will be on their shoulders now. They want to go back to square one? That depends on them… But we will pass whatever we think should be the law,” Rodriguez said.