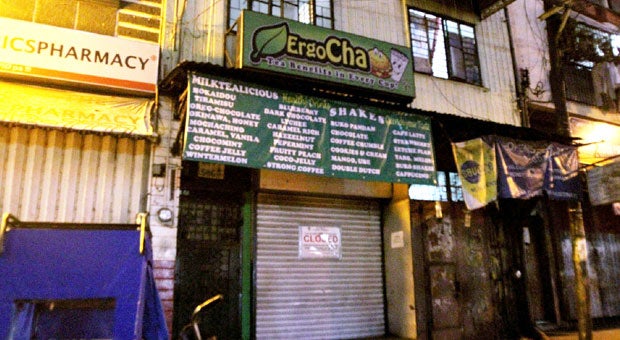 ErgoCha Milk Tea House on Bustillos Street, Sampaloc, Manila, is closed by authorities after the sudden deaths of its owner and a customer and the poisoning of another who reportedly drank beverage sold in the shop. RICHARD A. REYES/PDI

The Department of Health (DOH) said on Monday that it did not find any toxic substance in the milk tea that killed two persons in Manila last Thursday, according to the preliminary findings of the tests it conducted.

Garin said that they are looking at the case as a possible poisoning incident.

“The situation appears to be an isolated event, pointing to a possible case of poisoning. Let me emphasize that this is isolated. In fact, this is the third time the couple bought milk tea in the same food establishment. No untoward incident happened during the previous intake,” she said.

Garin said that they will expand their tests to include blood, gastric and tissue samples obtained from the victims to determine the cause of death.

Meanwhile, Manila Police District (MPD) spokesperson Marissa Bruno said that they did not tamper the milk tea samples forwarded to the DOH and the Food and Drugs Administration (FDA).

The findings of the DOH countered the results of the autopsy conducted by the MPD on Suzaine Dagohoy, one of the victims who took a sip of the flavored milk tea, which said that she died due to “shock secondary to ingestion of toxic substance.”

An MPD source earlier told the Philippine Daily Inquirer that the initial findings on the autopsy of William Abrigo, the second victim and the owner of the ErgoCha Milk Tea House, showed that “throat did not show indications that a strong substance, such as silver nitrate or cyanide, passed through it.”

Reports said that FDA is eyeing if the milk tea contained cyanide which caused the deaths of Dagohoy and Abrigo last Thursday.

On Thursday morning, Dagohoy complained to store owner Abrigo that the drink she ordered was foul tasting. This prompted Abrigo to taste the drink. Minutes after, both Dagohoy and Abrigo collapsed then later died.

Dagohoy’s boyfriend, Arnold Aydalla, who took a sip of the drink but immediately spat it out, is still recovering at the Philippine General Hospital. DL

Palace: FDA now has initial findings on cause of milk tea deaths