‘I swear I’m telling the truth’

SILANG, Cavite—“With God as my witness, I tell you the truth.”

That’s how President Benigno Aquino III on Thursday sought to convince the nation that what he had been saying he knew about a bungled counterterrorism operation that left 44 elite police commandos was true.

But he offered no public apology as demanded by the families of the 44 SAF commandos who were killed in a daylong gun battle with Moro rebels in Mamasapano, Maguindanao province, on Jan. 25.

In his fourth speech about the incident that has become his biggest political crisis, the President appealed for public understanding of the decisions he made in the aftermath of the tragedy, including not showing up at the arrival honors for the slain policemen at Villamor Air Base on Jan. 29.

For the first time, Mr. Aquino said he “regretted trusting the people who concealed the truth” from him.

As earlier reported by the Inquirer, the President said in his speech at the 36th PNPA graduation rites would be the last time he would discuss Mamasapano, except if the congressional hearing on the incident would need “further clarification” from him.

“With God as my witness, I tell you the truth,” Mr. Aquino told the graduating members of the PNPA Lakandula Class of 2015 who were in formation at Camp Gen. Mariano Castañeda field here.

Six of the fallen SAF commandos were graduates of the PNPA.

The President stressed that the new police officers deserved to know the truth about how he arrived at the decisions he made on Jan. 25 as Oplan Exodus was unraveling, even if, he said, there would still be those who would doubt his word. 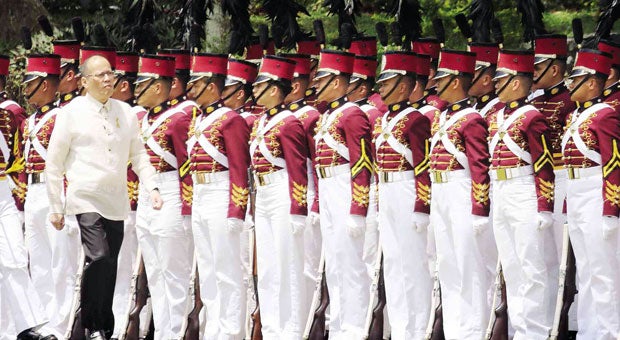 “I am aware of this: That no words will suffice to explain the deaths of our brave policemen. A report or a speech can never reflect the entirety of what is felt by a parent who lost a good child. All I can do, after saying all that must be said, and after doing all that must be done, is to ask for your deep understanding,” Mr. Aquino said.

“Today, I say this once more: As President, I am fully responsible for any result—any triumph, any suffering, and any tragedy—that may be borne of our desire for lasting security and peace,” he said.

As in his past narrations about Mamasapano, the President left his critics asking why he allowed Purisima to have a role in the planning and execution of the SAF mission.

Mr. Aquino emphasized that the debacle was the result of the failure to coordinate with the military, a responsibility that Napeñas assumed during the briefing for the President about the mission on Jan. 9.

“Regardless of my anger for the disregard for the orders I gave, regardless of my regret for trusting people who concealed the truth from me, I can never erase the fact: 44 members of our police force are dead. And this happened during my term. Let me stress it: I will bear this basic truth with me to my grave,” he said.

The President said that he was “saddened by the fact that, despite my effort to give the families space to grieve, as they were to meet their fallen loved ones for the first time, some people found fault in this by calling me cruel or without regard for such loss.”

Mr. Aquino said that his absence from the arrival honors was meant to help the families heal from their loss, and he did not want to face them without answers to their questions about why the commandos died.

“If my response was ‘I do not know,’ how could I help hasten the healing?” Mr. Aquino said.

“I am also saddened that our peace process has been affected by the sentiments connected to the result of Oplan Exodus. To every Filipino who has felt failure or has been hurt because of the events related to this operation: It is with the abiding humility that I ask for your deepest understanding,” he said.

He took exception to the failure of the PNP board of inquiry and Senate reports to seek clarification from him but instead speculated.

The President noted, however, that at the very least, the two reports reaffirmed “the position we had taken from the very beginning” that the SAF’s lack of coordination with the Armed Forces of the Philippines “was a major mistake.”

“Yes, I am the President, but I am also human. I cannot read the mind of every person in front of me, and I cannot personally monitor every situation. But as I have promised, I will continue to do what is right and just. I will continue to exert every effort to serve all of you and to faithfully fulfill my sworn mandate. I am not saying that I am like God, who knows everything, but I have a duty to right whatever wrong I discover. And I assure you: We respect due process. Those responsible will be held to account,” he said.

The President recounted in his speech that without the sense of urgency in the updates he received from the Mamasapano operation, he proceeded to Zamboanga City on Jan. 25 to attend to the pressing security concerns there, following a car bomb explosion that killed two and injured dozens on Jan. 23.

He said he also wanted to discuss the rehabilitation efforts in the city, more than a year after rogue members of the Moro National Liberation Front (MNLF) attacked in September 2013.

But what was going on in Mamasapano was on his mind that morning, and he thought that the operation had been completed, Mr. Aquino said.

But it was only in the early evening that he was informed of the “true situation” in Mamasapano, he said.

The President said he ordered the military to link up or at the very least deliver aid or medical supplies to the beleaguered policemen.

Mr. Aquino told the new police officers that the most important question he wanted to answer following the tragedy in Mamasapano was one posed by the father of a slain SAF commando: “Why did you allow my son to go there? Why did you let him die?”

“I understand where such statements come from. I have repeatedly looked back on what I knew about what happened, and have thought about whether I had been lacking, and whether I could have done more,” he said.

The President stressed that he would not order the uniformed services to go on a suicide mission.

He said that if a delicate operation was not turning out as planned, he would always be the “very first to call for its cancellation.”

“However, the version of the plan presented to me convinced me that adequate preparations were made, and that it would be executed correctly. I also assumed that all my orders would be followed, especially since I was dealing with professionals regarding the matter,” he said.

House Speaker Feliciano Belmonte Jr. said the President’s explanation should be enough to appease the public.

“I am satisfied with his explanation. He has accepted responsibility. Time to move on,” Belmonte said.

But at least two party-list lawmakers from the Makabayan bloc were dissatisfied with Mr. Aquino’s speech, interpreting his words as a hardheaded refusal to accept accountability.

“President Aquino’s refusal to admit accountability in the death of the SAF 44 while still blaming others will only worsen his predicament as it further fuels the clamor for him to step down,” Bayan Muna Rep. Neri Colmenares said.

He said blaming Purisima was “one of the worst defenses” the President could make, since Purisima, who took charge of the Mamasapano operation even though he was under suspension, had no authority at the time.

“[Mr.] Aquino’s actions not only endangered the lives of the SAF men but also sent the wrong message to the people,” Colmenares said.

“The President has purposefully and willfully missed the point in this speech. The point is to admit that he broke the chain of command, that he used the PNP SAF as cannon fodder, that he is ultimately responsible for the bloodshed in Mamasapano,” Ridon said.

The House will resume its inquiry into the Mamasapano debacle on April 7 and 8.

Belmonte said it was up to the two committees leading the investigation to decide whether to ask for a further explanation from Mr. Aquino or his subordinates, about the incident that has imperiled the passage of the proposed Bangsamoro Basic Law.

“Let us just respect his sentiments. At least there is a gesture of humility on his part,” he said.

Bayan Muna Rep. Carlos Isagani Zarate called the President, “PinoyQ,” a play on Pinocchio, the fairy-tale puppet whose nose grows every time he lies, and “Pontius Pilate,” for continuing to wash his hands of accountability for Mamasapano.

“How can we understand what happened in Mamasapano if the President himself refuses to tell us his real role in that event? Also, there are more questions that remain unanswered, which include why he broke the chain of command and trusted suspended PNP chief Alan Purisima,” Zarate told reporters in Davao City.

Gabriela Rep. Luz Ilagan said the President needed “a reality check because he sees another reality from the reality experienced by the people.”

“He should fire his scriptwriters because their story does not hold together. He said somebody has to answer; he is the one who should answer. He should resign. He is hopeless, nothing can be done about him. He is inventing a reality totally different from the reality experienced by the whole country,” Ilagan told reporters in Davao City.

“Even his timeline account does not match with the official timeline of events, which already came out in the investigation. He lives in a videogame reality, how can we trust a President like that? We would be in grave danger if we follow such a leader,” she said.

Activists who gathered in Barangay 413 on Bustillos Street, Manila, jeered as President Aquino was speaking at the PNPA.

Numbering about 50, the activists refused to accept the President’s statement that he was misinformed about the true situation in Mamasapano.

“The blame game goes on,” a woman exclaimed. “Just step down.”

“There is nothing new in his speech. He is still dodging the issues and passing the buck to other people,” said Lloyd Magsay, spokesperson for Anakbayan Manila who was at the gathering.

“He said this is the last time he would speak about the issue. That’s unacceptable, because he still has a lot to answer for,” he said.

The activists criticized Mr. Aquino for not apologizing and instead asking for public understanding.

“He asked for our understanding. So we will just tolerate that? In response, we ask him to understand the people, and just resign,” Magsay said.

The activists said they would stage community protests until March 30 to call for Mr. Aquino’s resignation.

The National Union of People’s Lawyers (NUPL), a group of civil and human rights defenders, said Filipinos would never understand President Aquino as long as he refused to explain the reasons for his actions that led to Mamasapano.

“[They were] armed to the teeth and [went there] in the dead of the night and then they expected a warm and hearty welcome?” he said. With reports from DJ Yap, Jerome Aning and Nathaniel R. Melican in Manila; Germelina Lacorte, Inquirer Mindanao