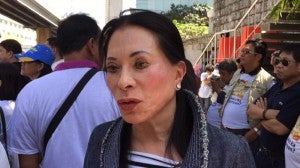 In an interview with INQUIRER.net during the anti-Aquino rally on Sunday at Edsa Shrine, Cojuangco slammed her nephew for not sending troops to help members of the Philippine National Police-Special Action Force (PNP-SAF) who fought with Moro rebels in Mamasapano last January 25.

“These were my sons who were killed; there was no call from him to save their lives,” said Cojuangco, who in the past decades was involved in humanitarian projects in Muslim communities in Mindanao.

The presidential aunt claimed that Aquino should be held accountable for the incident.

“He is responsible (for the botched Mamasapano incident). If he (Aquino) was very concerned about saving the peace and the BBL (Bangsamoro Basic Law), it’s just a piece of paper. It can be restudied and you can look at it very well again. But, he didn’t care. It is the lives (of the troopers) that were at stake. You can’t bring back lives,” she said.

She also blasted Aquino for failing to resolve several critical issues, including the botched hostage taking in 2010 and the implementation of the Disbursement Acceleration Program (DAP).

Meanwhile, Cojuangco also denied being one of the organizers of the anti-Aquino rally, claiming she and her group were only invited to the gathering.

“This protest action was not organized by us,” Cojuangco maintained.

The protest organized by Edsa 2/22 coalition on Sunday called for “system and reform change” through demanding mass resignation of government officials.