Vice President Jejomar Binay has agreed to form an advisory council in the event that President Benigno Aquino III is forced to resign by a people power-like movement in the run-up to the 29th anniversary of the first People Power Revolution on Feb. 25.

Former Tarlac Gov. Tingting Cojuangco on Friday said that her husband, former Tarlac Rep. Peping Cojuangco, who is Mr. Aquino’s uncle, was able to convince Binay of the idea. She said Binay gave the commitment in a meeting with her husband last week.

“He [Binay) did agree to an advisory council, like a Sukarno-guided government,” Tingting told members of the Capampangan in Media Inc. in a forum at the Holiday Inn at the Clark Freeport on Friday.

“Why would Binay not welcome it?” she said, noting that in the Constitution, a vice president succeeds a president who fails to perform his duties or leaves office. 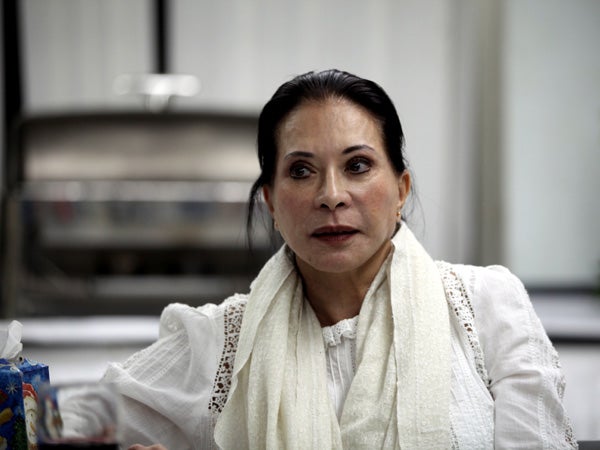 But a spokesperson for Binay on Friday denied that that the vice president had agreed to the creation of any such body.

Salgado said he was told Binay had met with Peping Cojuangco in early February “on a totally unrelated matter”.

He said that Binay, even if he is the constitutionally mandated successor, has reiterated that he was opposed to the resignation of the President.

The Aquino administration is reeling from a public backlash over the massacre of 44 Philippine National Police Special Action Force (SAF) commandos by Muslim secessionists in Mamasapano town, Maguindanao province, on Jan. 25.

Various groups left unsatisfied with Mr. Aquino’s explanations about the tragic operation, including those demanding that he resign, are expected to converge at Edsa during the Edsa I People Power Revolution commemorative activities starting on Jan. 22.

The National Transformation Council (NTC), a group that calls itself an ecumenical and interfaith collective, will be holding a Mass and rally at the Edsa Shrine at 2 p.m. on Feb. 22. The leftist Bagong Alyansang Makabayan said it would form a human chain for the Edsa 1 anniversary.

The Cojuangco couple have admitted to being among those asking for Mr. Aquino to step down, but insist that they do not favor nor are party to coup plots.

Tingting on Friday said that the rumored coup plot implicating them was “a spin of Malacañang.”

She said a coup would not be needed. “Civilians can do it,” she said, referring to people power movements.

“I think this is going to build up,” she said, referring to rallies during the Edsa anniversaries.

Malacañang on Friday remained firm that the President will complete his term and step down on June 30, 2016—and not a day earlier.

“The President will step down on June 30, 2016. I can tell you that. Any reports or stories of any other exit plan apart from that are fictitious,” said deputy presidential spokesperson Abigail Valte.

Valte said the calls for the President’s ouster by various sectors “is part of the democratic free space” of citizens.

“Obviously, we disagree with their statements and their calls to action,” she said.

Those calling for Mr. Aquino’s resignation or ouster believe he has to be accountable for the Mamasapano debacle.

Valte said Malacañang does not “share that same perception” that the calls for Mr. Aquino’s ouster are “gaining ground.”

“The President is no stranger to calls for resignation. In the course of the more or less five years that he has been in office, we have seen these sporadic calls from different groups, and they always have not resulted in a situation that would please them—or at least it has not been—it has not resulted favorably for them,” Valte said.

Tingting Cojuangco did not give details of the Sukarno-type guided government that they are proposing.

“Guided democracy” was the political system that Sukarno, Indonesia’s independence leader and president for life, established in 1957 after a period of unstable parliamentary democracy. He said Western-style democracy was inappropriate for Indonesia’s situation. Instead, he sought a system based on the traditional village system of discussion and consensus under the guidance of village elders. In practice, Indonesia’s guided democracy was an autocratic system, where deliberations at the local level were guided by village elders but the president ran the country by decree.

Tingting said the advisory council is not prohibited under the 1987 Constitution. “It’s similar to Cory’s [Aquino] revolutionary government which, after a year, drafted a new charter,” she said.

She said the NTC, which Peping supports, should form part of the next president’s advisory council. The NTC has various church denominations as members.

According to Tingting, a post-Aquino council could be a “big council” which Binay would have to lead “whether people like him or not.”

She said her husband and Binay “spoke regularly” though there have been no follow-up talks since their meeting last week.

She said their friendship goes back to 1978 when the then detained Sen. Benigno Aquino Jr. ran for a seat in the interim Batasang Pambansa.

Asked why it was urgent for Mr. Aquino to resign when the national and local elections are little more than a year away, she said, “We have to right what’s going on now.”

Tingting said she and her husband were upset with their nephew when the issues of Priority Development Assistance Fund (PDAF) and Disbursement Acceleration Program (DAP) became public.

She said they want the President to leave because of his administration’s “inefficiency, dishonesty and corruption at every level in government, [for the] removal of safeguards versus election fraud in the Automated Election System Law and lately [for] the taking of 44 lives in the Mamasapano firefight.”

“’Peping said, ‘Hindi kaming mga Cojuangco magnanakaw (We Cojuangcos are not thieves)’,” Tingting said. “Crudely speaking, this (the use of PDAF and DAP) is bribery [of legislators].”

Asked if Mr. Aquino would heed the outcry and resign, Tingting said: “I don’t know him anymore.”

She said her nephew used to be a “nice boy, very amiable.”

Asked how many resign movements there were now, Tingting replied: “There are plenty who come to our house [in Forbes Park].” With Nikko Dizon and Niña P. Calleja