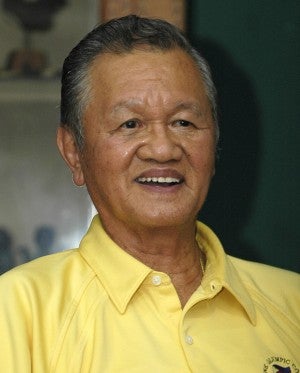 Former Tarlac Rep. Jose “Peping” Cojuangco Jr., an uncle of President Aquino, admitted that he was among those pushing for change in the country’s leadership but claimed that the initiative was neither a prelude to a coup nor a military takeover. INQUIRER PHOTO / RODEL ROTONI

MANILA, Philippines–Norberto Gonzales, the national security adviser of the Arroyo administration, admitted Tuesday that he was part of a group calling on President Aquino to step down.

But Gonzales is not the only one.

Former Tarlac Rep. Jose “Peping” Cojuangco Jr., an uncle of President Aquino, also admitted that he was among those pushing for change in the country’s leadership but claimed that the initiative was neither a prelude to a coup nor a military takeover.

“When we say stepping down of the President, we are talking about regime change. It’s not only him that should step down” but also Vice President Jejomar Binay and other officials, Gonzales seemed to echo Cojuangco.

Asked in his residence in Makati City if he was the rich businessman referred to by Sen. Miriam Defensor-Santiago as the one behind the alleged coup plot, Cojuangco said: “No I’m not because I’m not in favor of a coup. I am against a military takeover. But I am in favor of major reforms or change in leadership, especially in the last crucial 16 months before the 2016 elections.”

Cojuangco’s idea of change jibes with the call of Gonzales for the establishment of a “transition government” through a National Transition Council (NTC).

Since December 2014, the NTC has been active in gathering 10 million signatures nationwide in support for the call for the President to resign or to step down.

Led by former Sen. Francisco “Kit” Tatad and Gonzales, the NTC said Aquino was unfit for the presidency due to his “incompetence and insensitivity.” The NTC said it could take over the government in a “caretaker capacity.”

Upon the resignation of the President and his Cabinet, Gonzales said in a phone interview that the council would try to establish an interim government and fix the electoral system as it believed that this had “failed to elect our leaders.”

It will be the bishops and other religious leaders who would serve as “moral advisers’’ of the council, he said.

Cojuangco, a brother of the late President Corazon Aquino, said the calls for major changes in leadership and in governance, which he claimed had earned the support of key sectors, gained momentum after the police operation in Mamasapano.

Cojuangco said the incident was a glaring lapse in leadership, accountability and transparency.

“I believe God’s hand is moving in favor of major reforms and change that this country needs… As I said many had thought that everything was planned in Edsa I and Edsa II. But it was God’s hand. Nobody knew that things would lead to [changes in the country’s leadership] but we prepared. The two events are like this one. It’s time,” Cojuangco said.

He noted that the social atmosphere today was similar to the unrest that led to Edsa People Power Revolution in 1986 that toppled the dictator Ferdinand Marcos and Edsa People Power II that unseated in 2001 then President Joseph Estrada who was facing an impeachment trial on corruption charges.

Cojuangco has not publicly admitted that he is calling for his nephew to resign. “I will talk to him,” he said when asked whether he wanted the President to step down.

At a chance encounter in a restaurant, the President and his uncle almost had a chance to sit down and talk. Cojuangco said he believed his nephew knew what he was doing. “He told me, ‘Uncle Joe, bising-bisi tayo ah (you’re too busy these days).”

“He knows that what I am doing is well within the Constitution because it’s within the people’s power to seek and clamor for change,” the former lawmaker said.

At a forum in Manila, Gonzales said, “I will not engage in a coup and I will never support a coup because that is against my personal principle.”

“Coups don’t succeed in the Philippines. There have been many attempts in the past but these were unsuccessful. And when a coup fails, it creates more division,” he said.

However, Gonzales said he knew of people who were scheming to remove the President. “Two to three groups are thinking and preparing. These are the usual suspects,” he said but he refused to name names.

“Many are talking in whispers, holding meetings,” he added.

Gonzales hinted that among those planning a coup could be within the President’s own circle of friends to make his stay in power longer.

Asked what he meant with that statement, he said: “The President should watch his back. But who knows he himself might be involved.

“How do you extend your term? During the time of former President and now Pampanga Rep. Gloria Macapagal-Arroyo, I was the one being blamed, remember?

“Once you are in power, how [will you] sustain it? I was there, you know. It was very tempting,” he said.

Gonzales said the NTC was supporting the call of religious leaders for Aquino to step down and let a council take over the country.

On its website, the NTC describes itself as “an ecumenical and interfaith collective that works for the common good of Philippine society through rapid and comprehensive systems of change.”

Gonzales said he was supportive of the bishops, both Catholic and Protestant, who were calling for a new government.

At least five Catholic bishops have called on the President to “step down” because they believe he is no longer fit for the presidency.

Also supporting the groups’ stand are Bishop Butch Belgica of the Christians Bishops of the Philippines and Pastor Arthur Corpus of the United Church of Manila.

“We want him to step down,” Arguelles said at the same forum. The prelate clarified, however, that his group was not singling out Aquino as it was also asking other government officials to do the same.

“Not only President Aquino. All the guilty. All those who destroyed our country… Let us elect another set of leaders,” Arguelles said.

Arguelles also assured the public that the group would not support any kind of coup d’etat to oust the government. “We are not ousting. We want them to step down. We are not for violent change or for a military takeover,” he added.

While the possibility of a military coup is “very low,” another “people power” is not far-fetched, Gonzales said. “A people power is not planned. It just happens. I think a people power will happen… soon.”

“Before the Mamasapano incident nobody wanted P-Noy out, but things have changed after the incident. Some people were saying the only problem is who will replace him. Let’s wait for one or two more blunders from Malacañang, maybe [people power] will already happen,” Gonzales said.

Cojuangco, who helped his nephew during the presidential campaign in 2010, said he was not against the President. “What I am doing is for the country.”

Cojuangco’s wife, Margarita (also known as “Tingting”), is more expressive of her disgust with the President. “The indignation that we felt for the death of Ninoy (former Sen. Benigno Aquino Jr., the President’s father) is the same. One was killed, the other had people killed,” Tingting said, referring to the death of the 44 police commandos.

Tingting, a former president of Philippine Public Safety College who knew most of the officers who died in Mamasapano, was also among those who saw the bodies of commandos.

“I saw them all and those poor boys were just left there to die. The President is not telling the truth and to give justice to the Fallen 44, we must do everything to unearth the truth,” she said.

Former Vice President Noli de Castro laughed off rumors that he was part of a destabilization plot against the Aquino administration, saying those who were spreading such talk just wanted to divert the attention of the public from the so-called Mamasapano fiasco.

De Castro, a broadcast journalist, denied knowledge of the Movement for National Salvation calling for the resignation of all government officials to give way to a new federal type of government.

He said those floating the coup plot idea merely wanted to save the President from further criticisms because of the Mamasapano incident.

Sen. Ferdinand Marcos Jr. also denied that his political party was involved in a plan to ask the President and other officials to step down.

Gonzales: Aquino should resign but no to coup d’ etat