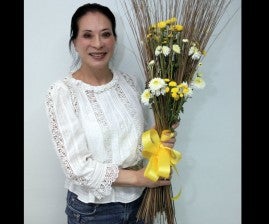 COJUANGCO: “I can’t live down years of modeling.” GENIE LAGMAN

There are times when being beautiful can be a disadvantage.

A former provincial governor, socialite Margarita “Tingting” Cojuangco knows this too well—especially now as she makes a bid for the Senate in next year’s midterm elections under the banner of the United Nationalist Alliance (UNA).

That she served as governor of Tarlac in the early 1990s appears to be just a footnote to her career as a popular model and being named by the venerable Harper’s Bazaar magazine as one of the 100 most beautiful women in the world in 1968.

“What can I do for people to take me seriously and not just a pretty face?” she asked Philippine Daily Inquirer editors and reporters at a dinner on Thursday.

But the inevitable question came up: Why does she think people don’t take her seriously?

“It’s because I can’t live down years of modeling. I think it’s because pretty women are supposed to be dumb like Marilyn Monroe, and she wasn’t dumb,” Cojuangco said.

The irony is, even if people think Cojuangco is “just another pretty face,” her fields of expertise are those often associated with men: public safety and national security.

A reserve Army colonel, Cojuangco earned her master’s degree in national security administration (MNSA) from the National Defense College of the Philippines (NDCP). She served as president of the Philippine Public Safety College for eight years.

Indeed, in a world fond of stereotyping, these are hardly what people think are interesting about one who was once the muse of legendary fashion designer Christian Espiritu.

In fact, public safety is the advocacy Cojuangco wants to bring to the Senate, if she is elected. “Everything is just about public safety. We breathe it every day,” she said.

When asked about what specific bills she plans to introduce, Cojuangco appeared exasperated and cited the failure of leaders to enforce existing laws.

“Maybe I’ll stop making laws. Or even better, I will make a law that will ensure that all these laws are [enforced],” she said, laughing.

Turning serious, Cojuangco said she wanted to review existing laws and perhaps introduce amendments so that these could be enforced.

After having worked on the peace process with the Moro National Liberation Front (MNLF), Cojuangco believed the Organic Act of the Autonomous Region in Muslim Mindanao (ARMM) was good enough to be retained instead of being abolished by a new Bangsamoro law. 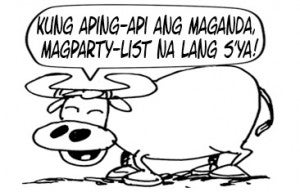 According to her, the “daang matuwid” (straight path) anticorruption policy of her nephew, President Aquino, while laudable, needs to have more drumbeating, as smuggling, among other irregularities, remains prevalent.

Her decision to go with the UNA was made at the last minute. She said she informed the President about it and stressed that there was no animosity between him and her and her husband, as many too often suggest.

Still, this is a part of Cojuangco—her involvement in issues—that not too many people are aware of.

Often, her presence as a beautiful, glamorous woman is what overwhelms people.

Cojuangco is aware that people who do not know her yet always have the same reaction when she first enters a room—they are either uncomfortable or in awe.

“But when we start talking, [it changes]. It becomes more warm,” she said.

Cojuangco shifts from English to Filipino and vice versa in normal conversations. And she’s hardly haughty, contrary to how socialites are perceived to be.

Cojuangco also said she had started to dress down by wearing white tops and jeans, and pearls instead of diamonds. Yet she remains looking glamorous.

If she dresses down more, she said, it would look “artificial and contrived.” Cojuangco does not want to be untrue to herself.

She can let her hair down. When she told the Inquirer staff that she was not comfortable giving heavy speeches on stage during campaigns, Cojuangco, stood up and imitated the booming voices and wild gestures of politicians.

Cojuangco married Jose “Peping” Cojuangco, the President’s uncle, when she was only 18. “During that time, the brides were young,” she recalled. The couple settled in Tarlac.

She did modeling as a hobby and disclosed that she was never paid for what people have thought was her first career.

Cojuangco recalled that she was in Manila with Peping when martial law was declared and people were being arrested, including her brother-in-law, Ninoy Aquino. The Cojuangco couple was not able to return to Tarlac.

That was the time, Cojuangco recalled, that she decided to go back to school. She was already a young mother by then, but managed to earn a college degree in three years.

She eventually took her master’s degree at the University of Santo Tomas and later took up her MNSA at NDCP. Cojuangco also earned doctorates in criminology and Philippine history.

“I had to prove to myself that I have to do it. I have to have something to fall back on,” Cojuangco said.

The socialite has become a teacher. To this day, she is invited by the NDCP to become a panelist for its students’ theses—a grueling task for anyone who takes it seriously.

Cojuangco reads the thesis proposals and sits down with students to explain to them how she wants them to revise or improve their work.

One MNSA student, Benjy Ferreras of the National Police Commission (Napolcom), told the Inquirer that Cojuangco was very strict with his thesis.

“I had a hard time but I suppose she took pity on me later on because her questions became less tough toward the end,” Ferreras said.

Like many other students, Ferreras first thought Cojuangco was somebody not just anyone could talk to. But Cojuangco was approachable and, in fact, had her driver bring him back to Camp Aguinaldo after they worked on his thesis one day.

“And then recently, I saw her on television dancing Gangnam Style!” Ferreras said.

Cojuangco could only shake her head when she recalled that impromptu dance number and her body language indicated she was unlikely to do it again.

She is aware that it is an uphill climb for her to the Senate. She’s nowhere near the Magic 12 in recent surveys. But for someone who describes herself as a risk-taker, Cojuangco is not about to give up.

She has started to network and touch base with people all over. Cojuangco has also given away around 6,000 pieces of walis tingting (broomstick), a cleaning implement found in every Filipino home.

Cojuangco thinks the broomstick would be a good reminder to people that they use the “tingting” to clean up their homes—and, ultimately, the country.

Through this banter, one advice for Cojuangco stood out: “Just be yourself. Tell them, ‘Take me for what I am.’”