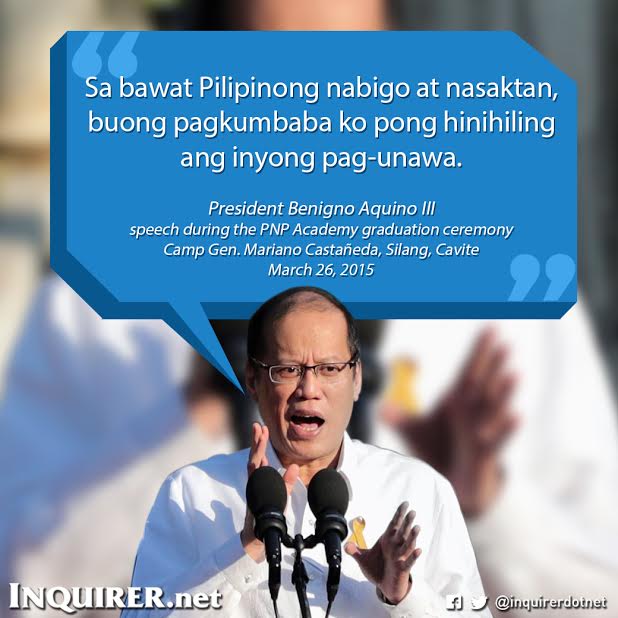 IN WHAT is likely his last speech on the Mamasapano incident, which has roiled his presidency and imperiled the proposed Bangsamoro Basic Law, President Benigno Aquino III on Thursday asked for the public’s understanding.

He stopped short of apologizing for the debacle which left 44 police Special Action Force (SAF) troopers, 17 Moro Islamic Liberation Front regulars, and at least three civilians dead—an apology which other national leaders, such as former President Fidel Ramos, had urged him to make.

“Sa bawat Pilipinong nabigo at nasaktan, buong pagkumababa ko pong hinihiling ang inyong pag-unawa (To every Filipino who was disappointed and hurt, I ask for your understanding, with all humility),” Aquino said at the Philippine National Police Academy (PNPA) commencement exercises at Camp General Mariano Castañeda in Silang, Cavite two months after the botched Mamasapano operation.

“I am aware of this: that no words will suffice to explain the deaths of our brave policemen. A report or a speech can never reflect the entirety of what is felt by a parent who lost a good child. All I can do, after saying all that must be said, and after doing all that must be done, is to ask for your deep understanding,” he explained.

“I say this once more: As President, I am fully responsible for any result—any triumph, any suffering, and any tragedy—that may be borne of our desire for lasting security and peace.”

A recent Pulse Asia survey revealed that 79 percent of Filipinos found Aquino’s explanation of the debacle insufficient. The same percentage of respondents also said the President’s decision to skip the arrival honors for the PNP troopers killed during the mission was a mistake.

Aquino has been drawing flak not only for his actions after the operation, codenamed Oplan Exodus, but also for allegedly allowing a suspended official—his close friend, former PNP chief Director General Alan Purisima—to direct the operation.

A recent Pulse Asia poll revealed that Aquino’s approval ratings dropped by double-digit percentage points, the biggest drop among the top five officials of the country.

Aquino said he could explain the importance of catching terrorists like Zulkifli bin Hir, alias Marwan, who was killed in the said mission.

“I could also detail the problems and the errors in the operation,” he said. “But now that I have shared all that I went through, and the information I held on that day, is there anyone who can say, in all honesty, that he can exceed everything we did in order to respond to the situation, given the information we held?”

But without naming names, he reiterated his earlier complaint that he was misled into believing that everything went according to plan.

“The version of the plan presented to me convinced me that adequate preparations were made, and that it would be executed correctly. I also assumed that all my orders would be followed, especially since I was dealing with professionals regarding the matter,” he said, alluding to Napeñas.

He also seemingly referred to Purisima when he said that the text messages he received about the operation, in the morning of January 25, was without urgency.

“From what was texted, it appeared to me as if the operation in Mamasapano had ended, or was coming to an end, because mechanized units and artillery were already providing assistance,” he said.

Nevertheless, he said he may be angry with his subordinates and regret trusting people “who concealed the truth”

“I can never erase the fact: 44 members of our police force are dead. And this happened under my term. Let me stress it: I will bear this basic truth with me to my grave,” Aquino said.

Amid rumors that he went to Mindanao during the operation because he anticipated its success, Aquino explained that he was in Zamboanga to visit a site of a bombing and to discuss the delayed rehabilitation of communities affected by the Zamboanga siege with a local official.

‘With God as witness’

He made it clear that there was no intention to put the SAF troopers on harm’s way.

Recalling a conversation with the father of a policeman slain during the operation, the President said he will not let any of his men embark on a suicide mission.

“If an operation poses serious danger, I will always be the very first to call for its cancellation,” he said.

When he was informed of the difficulty to reach the SAF units engaged in a gunfight in Mamasapano, he said he refused to abandon his men.

“Aren’t those who are in a precarious position our brothers? I ordered them to craft plans so that they could link up at the soonest possible time, and save the 84th. The minimum I agreed to was to deliver aid, such as medicine and resupply ammunition, granted that linking up was impossible,” he said.

“With God as my witness, I tell you the truth,” the embattled President told more than 200 PNPA graduates, as well as their parents and other government officials.

A recent Pulse Asia survey showed that 79 percent of Filipinos found Aquino’s explanation of the Mamasapano debacle insufficient. The same percentage of respondents also said the President’s decision to skip the arrival honors for the PNP troopers killed during the mission was a mistake.

Aquino, however, explained that his intention was to “give the families space to grieve, as they were to meet their fallen loved ones for the first time.”

“Some people found fault in this by calling me cruel or without regard for such loss,” he admitted.

He further argued that he wanted to “help them heal” and that it would not have helped if he faced them without knowing the whole story behind the botched operation.

“If my response was ‘I do not know (how or why they died),’ how could I help hasten the healing?” he said.

Reacting to the criticisms hurled against him,  he said, “Yes, I am the President, but I am also human.”

He said he will make sure that due process is followed and those responsible for the bloody encounter would be held accountable. JN/AC