MANILA, Philippines – President Benigno Aquino III’s decision to skip the arrival honors for the policemen slain in the Mamasapano operation was a costly mistake, the results of the latest Pulse Asia survey indicated.

The survey conducted from March 1 to 7 revealed that almost four out of five or 79 percent of Filipinos disagreed with that decision of the President.

Only 10 percent of the respondents said they agreed with Aquino while 11 percent were ambivalent on the issue.

Of the 1,200 respondents, 91 percent were aware that Aquino did not attend the arrival honors at the Villamor Airbase last January 29. 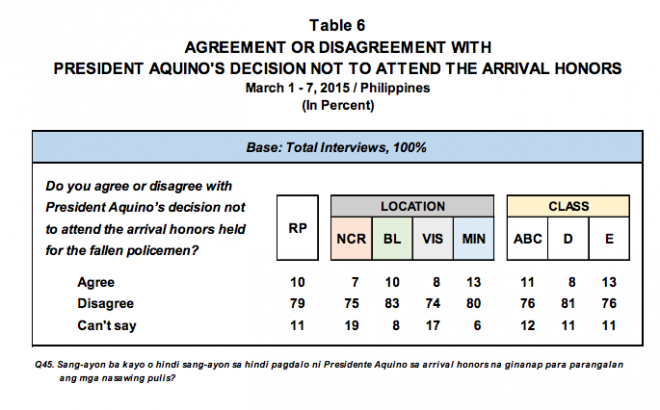 The release of the survey came two days after another Pulse Asia poll showed that Aquino’s approval and trust ratings reached a record low.

Disagreement was highest in the rest of Luzon at 83 percent, followed by Mindanao with 80 percent. Majority from the National Capital Region (75 percent) and the Visayas (74 percent) also expressed disagreement.

Since that incident, Aquino has been receiving flak from the public. His critics accused him of insincerity, in addition to allegations that he allowed former Philippine National Police (PNP) chief Director General Alan Purisima to direct the Mamasapano operation despite being suspended by the Ombudsman on graft charges.

The same survey showed that 79 percent thought that the Aquino administration’s explanation of the Mamasapano debacle was “not enough.” Ten percent of the respondents said it was enough while 11 percent were undecided. 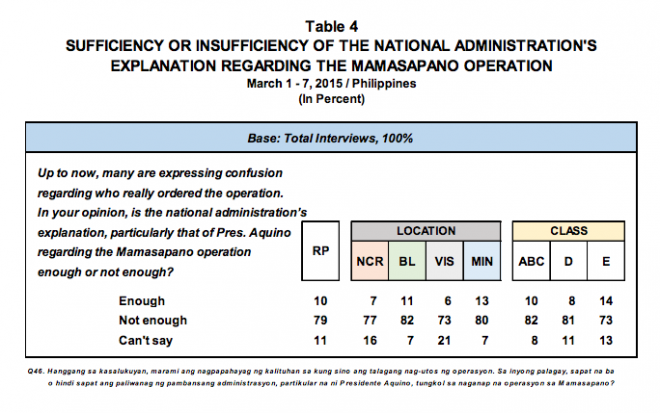