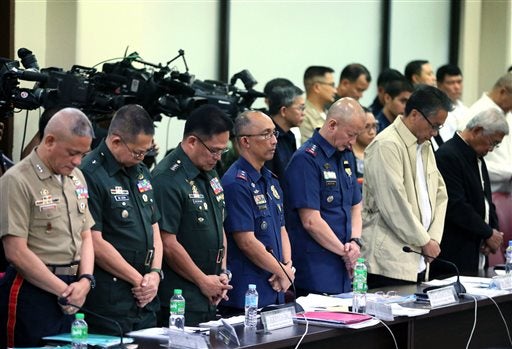 Armed Forces of the Philippines Chief of Staff Gen. Gregorio Pio Catapang Jr.(third from left), Defense Secretary Voltaire Gazmin(far right) and Interior Secretary Mar Roxas(second from right) learned about the fighting between Philippine National Police Special Action Force commandos and Moro rebels at different hours in the morning of Jan. 25. But they told the senators at Thursday’s continuation of the Senate inquiry into the Mamasapano debacle that they did not approach Aquino to tell him about the incident. AP

MANILA, Philippines–None of the country’s top three security officials informed President Aquino about the Mamasapano clash although they were aware of it and they were with him all day on Jan. 25.

But they told the senators at Thursday’s continuation of the Senate inquiry into the Mamasapano debacle that they did not approach Aquino to tell him about the incident.

They were with the President in Zamboanga City to visit the victims of a car bomb explosion that killed two people and injured 52 others on Jan. 23.

Gazmin and Roxas said they did not realize the urgency of the incident because the initial reports they had received were about a skirmish, a typical incident in the area, and they did not then have a complete picture of what happened.

Catapang said the Zamboanga meeting with the President was focused on discussing the bombing.

The suspended PNP chief, Director General Alan Purisima, the President’s close friend who also knew about the operation, clammed up when asked whether he informed Aquino of what was going on in Mamasapano that day.

“Your honor, may I be given time to seek clearance from the President to answer the question?” Purisima said.

But Purisima did not quite get away, as Sen. Miriam Defensor-Santiago was there to give him a dressing down for “meddling” in the SAF operation despite being suspended by the Ombudsman on graft allegations.

Had Purisima not “dipped his finger into the pie,” the 44 SAF commandos would perhaps still be alive today, Santiago said.

Purisima tried to defend himself, saying, “When I delegated responsibility, I did not delegate accountability.”

“Really? Are you not ashamed of yourself?” Santiago said.

Purisima admitted talking with the President about the SAF operation while suspended only once.

“No,” he said when asked if either he or the President was responsible for the operation above the level of the SAF commander.

That was sacked SAF Director Getulio Napeñas, who had taken full responsibility for the disastrous operation but who Santiago said should not be entirely blamed for the debacle.

“Who are the people behind your back?” Santiago asked Napeñas. “You’ve assumed full command responsibility; you’ve acted as a gentleman. But I want to know who are the people pulling the strings behind you since you’re not the commander in chief of the PNP.”

‘Per guidance of President’

President Aquino learned what was happening in Mamasapano in the afternoon and directed the military to help rescue the SAF commandos, according to Lt. Gen. Rustico Guerrero, chief of the AFP Western Command.

Guerrero said he told the President what he knew of the incident during a briefing in Zamboanga at 5 p.m.

The Westcom chief, in a text message to the 6th Infantry Division, gave the directive to ensure no friendly-fire deaths in helping the SAF troopers, “per guidance of the President.”

There was no answer from Catapang, Gazmin and Roxas.

Poe followed up, asking Catapang why he did not see the need to inform President Aquino when Catapang felt it was necessary to provide assistance to the pinned down SAF troopers.

“At least, wouldn’t you ask the President, ‘Sir, are you aware of this operation?’” she said.

To which Catapang replied: “Madame Chair, we were focused on the Zamboanga bombing the whole day.”

On questioning by Sen. JV Ejercito, Catapang said the first report he received in the morning did not contain a casualty report, and he did not inform Aquino because he was focused on Zamboanga.

The report on the death toll came out in the discussion in the afternoon, but did not come from him, Catapang said.

“I never informed the President. It just came out in the discussion because General Guerrero was reporting that afternoon,” he said.

“If I had known there were more than 390 who were going to undertake that operation, any small information would trigger thinking. But firefights happen there every day,” Roxas said.

He also said he did not tell the President about the initial information he had received because it appeared to be an isolated event at that time.

Asked by Binay when he informed the President about the Mamasapano incident, Roxas said that upon arriving in Zamboanga, the group went straight to a briefing. Around 11 a.m., there was a report of something happening in Maguindanao, but it was not clear.

“So you told the President there was something not clear that was happening in Mamasapano?” Binay asked.

Roxas replied: “Something like that. There were many things happening. Maybe I should reconstruct the text messages that were the basis of what happened.”

Binay then asked what was the President’s response.

Roxas said he could not remember.

Gazmin explained that he did not tell the President about the initial report he had because it involved a police operation. He said reports of such encounters came frequently.

“To me there was no sense of urgency because I receive reports of similar encounters [every day], until after the report came that the number of casualties was mounting,” he said.

Binay noted that the situation was already risky because it could affect the peace process.

Gazmin said the AFP had no involvement then because it was a police matter.

He also said he did not approach Catapang to ask him about the matter.

“The report that the AFP was asked for help did not reach me,” he said.

He added that he was not able to consult Catapang about the report because the briefings on Zamboanga issues were going on.

Binay, in a statement after the hearing, said she found it hard to believe that none of the security officials told the President on Jan. 25 about the incident in Mamasapano, even with a radio station reporting on the deaths of many SAF troopers.

She said the Commander in Chief must be told of such things, which could have detrimental effects on the efforts to bring peace to Mindanao.

Poe was also incredulous that military officials did not inform the President about the fighting in Mamasapano.

“It seems difficult to believe that from morning to night, you were with the President in Zamboanga and you did not mention that. You were beside the President and he is your Commander in Chief,” she said.

Sen. Loren Legarda asked Catapang if he knew of anyone who told the President about what was going on in Mamasapano.

Catapang replied: “Not to my knowledge, your honor.”

Catapang replied in the affirmative.

In a briefing for reporters later, Santiago said the President and three others who were in on the operation should “assume responsibility” for the deaths of the 44 SAF commandos.

“I am naming the President because I don’t think it serves public interest to fudge the issue—to never mention his name, like he was some sacred cow. I don’t think he needs my protection. He can stand for himself,” she said.

“He had a direct hand from the very beginning, according to his own admission. His version is that in the due course of the four years’ time that it took to catch this terrorist, he dropped out of the line of command. I don’t buy that,” she added.

Santiago admitted that the President was immune from suit, but the rest could be charged in court.

She did not name the three other officials.

“With the President you cannot do a thing. He has immunity from suit, except impeachment. But he loses that immunity when he leaves his office in 2016,” she said.

Of Napeñas, she said: “He’s the scapegoat. But he’s a sacrificial lamb at the cost of telling the truth to the entire Filipino people.”

At the hearing, Santiago said the SAF troopers “literally walked into a trap,” because their escape route was covered by heavy fire, Santiago said.

This was “brutal violation” of the Geneva Conventions of War, she said.

During the hearing, Santiago grilled Napeñas on his failure to coordinate the operation to capture Marwan with the military, and failure to inform the PNP officer in charge, Deputy Director General Leonardo Espina.

Napeñas explained that previous coordination with the military compromised the operations. And that despite the debacle, he maintained that the military would be informed in future operations on “time on target.”

“You failed before, and when you did it on your own, you also failed,” the senator said.

The former SAF chief reiterated that he informed Espina when the SAF troopers were already on the ground because the operation that began in April 2014 was “delegated” to him. The senator found this “unacceptable.”

He also said notifying the coordinating committee on the cessation of hostilities within 24 hours was not required if the operation involved a high-value target.