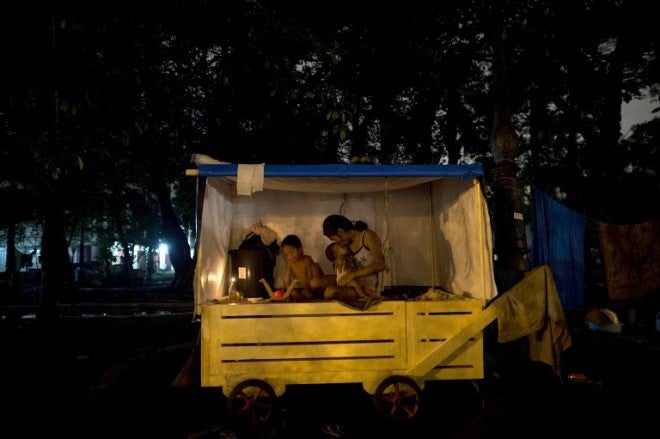 Mariefe Guarra spends the Christmas Eve with her children sleeping on a wooden cart donated to her a day before along a street in Manila on December 24, 2014. Guarra husband earns US$4 a day as a scavenger collecting plastic bottles. They live on the street for 34 years. Results of a recent Pulse Asia survey showed the “bosses” were generally dissatisfied with the performance of the Aquino administration as it failed to score any majority approval rating on 13 selected issues confronting the nation. AFP PHOTO/NOEL CELIS

MANILA, Philippines–The “bosses” were generally dissatisfied with the performance of the Aquino administration as it failed to score any majority approval rating on 13 selected issues confronting the nation, results of a recent Pulse Asia survey showed.

Results of the survey conducted early this month and released Tuesday found that economic issues remained the most urgent national concern among Filipinos.

As a result, the administration scored the lowest approval and highest disapproval ratings in addressing these issues despite claims of economic growth.

Sought for comment, Communications Secretary Herminio Coloma said “in the next 15 months, the administration will intensify efforts at job creation while maintaining fiscal discipline in order to rein in inflation.”

“Good governance is imperative in achieving inclusive growth,” he added.

Asked if the Palace was taking surveys seriously, Coloma told the Inquirer: “These surveys provide useful feedback from our bosses and indicate which areas of governance may require greater attention.”

The nationwide survey used face-to-face interviews with 1,200 Filipinos aged at least 18 years old. It had a margin of error of plus-or-minus three percentage points.

Security guard Alfredo Jauod, 56, doubted the economic growth trumpeted by the administration, saying only the wealthy benefited most from it.

“They have never felt the agony of the poor,” minimum wage-earner Jauod, who has rendered service for 33 years, said of the rich.

Zaldy Vergara, a tricycle driver for over 15 years, said government should curb increasing prices to make basic goods affordable for self-employed people like him.

Vergara, a father of four, earns less than P200 a day, below the minimum daily wage of the recently approved P486, up by P15 from P466, in Metro Manila.

Thirty-three percent of the respondents both approved and disapproved of government efforts to increase workers’ salary, yielding a zero net approval rating (approval minus disapproval).

Disapproval was the plurality sentiment of the public on addressing inflation (41 percent) and reducing poverty (40 percent).

Only 28 percent approved of administration efforts to curb poverty while 29 percent were satisfied with controlling inflation, posting identical net approval ratings of minus 12 percent.

The Philippine economy grew 6.1 percent in 2014, slower than the 7.2-percent gross domestic product (GDP) growth in 2013 and 6.8-percent expansion in 2012, according to the National Economic and Development Authority.

The survey was conducted from March 1 to 7, a week after the Jan. 25 botched antiterrorism operation in Mamasapano, Maguindanao province, that resulted in the death of 64 Filipinos—44 members of the Philippine National Police Special Action Force, 17 Moro Islamic Liberation Front guerrillas and three civilians.

His trust rating plummeted 20 percentage points from 56 percent to 36 percent in the aftermath of the Mamasapano debacle.

The same survey also found that 79 percent of Filipinos deemed insufficient Aquino’s explanation of the Mamasapano fiasco. Ten percent said his explanation was sufficient while 11 percent were undecided.

Changing the Constitution, or Cha-cha (4 percent), was identified as the least urgent of the issues that the administration must address.

Other issues that posted single-digit percentages were controlling fast population growth (9 percent), and defending the Philippine territory and preparing to successfully face any kind of terrorism, both rated 5 percent.

Pulse Asia also asked the respondents about their opinion on whether they strongly approved, approved, disapproved, strongly disapproved or felt ambivalent of the Aquino administration’s performance on the selected issues.

Twenty-nine percent said they disapproved of the government efforts to promote peace and enforce the law, an 8-percent increase from 21 percent in November.

Only 40 percent approved of the administration’s peace efforts, while 41 percent were satisfied of its law enforcement, yielding a net approval rating of 11 percent and 12 percent, respectively.

Likewise, more Filipinos were dissatisfied with government performance on defending the integrity of the Philippine territory against foreigners with 23-percent disapproval, up from 18 percent in the past four months.

Pulse Asia noted that public assessment of the performance ratings of the Aquino administration in March did not differ significantly from those recorded in November.–With a report from Jerry E. Esplanada