For this mayor, pink is the color of peace | Inquirer News
Close
menu
search 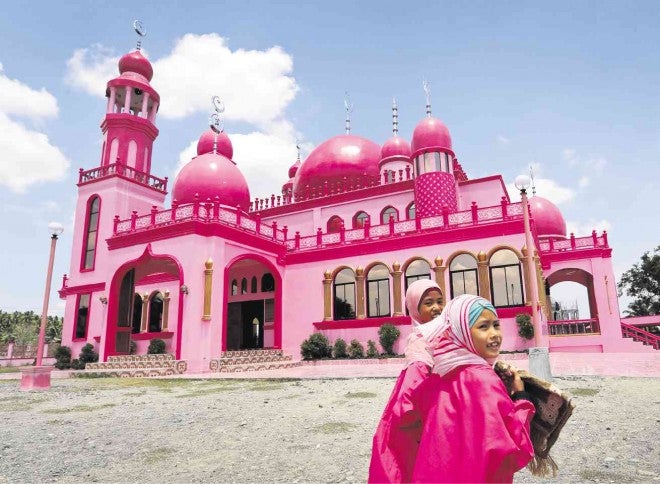 First of a series

DATU SAUDI AMPATUAN, Maguindanao—If he had his way, Mayor Samsudin “Sam” Dimaukom would paint this town a shocking pink.

The imposing mosque he had built out of his own pocket, along with the municipal hall building and the pennants fluttering on its fence, sports his favorite color, providing a stark contrast to the tan backdrop of this dusty town of rice and corn farmers.

Dimaukom wears pink shirts and drives around in a pink Hummer.

“Pink is the color of love and peace,” he said. “That’s what’s needed in a region wracked by a decades-long Moro insurgency.”

Dimaukom spoke behind a desk adorned with his nameplate on a canister of 76-mm ammunition fired from a Scorpion tank—a memento from Col. Edgar Gonzales of the campaign a year ago against the Bangsamoro Islamic Freedom Fighters (BIFF) at Shariff Saydona Mustapha.

Three weeks into the Army offensive, some 60,000 people—from a peak of 75,000—occupy evacuation centers in appalling conditions, according to a report from the office of the ARMM governor in Cotabato City.

Dimaukom doesn’t sound terribly alarmed that the situation in the encampments would deteriorate. He said that in one barangay (village) he had visited, the Army battalion commander had told him that the displaced could go home.

“If we do not do anything like that we will not know what will become of us,” said the 53-year-old, self-made millionaire. “There will be progress, but it will be a long process.”

As a boy, Dimaukom sold water spinach and firewood scavenged from the forest. A turning point in his life came when a massive earthquake and tidal wave hit the region in 1976 and forced him to try his luck in Cotabato City. There, he parlayed savings from a sari-sari store and carinderia, and rose to become a real estate development financier.

His foray into politics came when he was appointed vice governor of Maguindanao by Gov. Toto Mangudadatu, who won the gubernatorial race in the province on a sympathy vote after the slaughter of 58 people, including his wife and 32 journalists, during the 2009 election campaign. It was the worst political massacre in the country.

These days, Dimaukom goes around distributing relief aid to the displaced, talking to military officers about conditions in their barangays about the possibility of returns.

“We need to win back the trust of the people,” said the mayor. “We need to make them feel they are not isolated.”

Following decades of violence and corruption that have kept the region impoverished, a new crop of leaders has emerged, like a breath of fresh air, with visions of peace and progress, according to workers of Community and Family Services International (CFSI).

“These leaders have earned respect in their communities,” said Steven Muncy, executive director of CFSI, a humanitarian agency that in the past decade has been implementing programs of the World Bank and UN agencies in conflict zones in Mindanao.

Dimaukom is one of them.

In Pagalungan, there’s Mayor Salik P. Mamasabulod, who knew exactly what to do when villages in the municipality were emptied last month as a result of a rido—clan fighting that is one major cause of intermittent mass displacements in Mindanao.

The displaced stayed for nearly a month in the encampments, receiving aid and returning home after hearing a report from Mamasabulod, who had gone to their barangays with the military and saw for himself that the villages were safe.

A farmer with only an elementary education, the 55-year-old Mamasabulod had seen it all. He had served as barangay captain for 15 years before he was elected vice mayor. He became mayor when the incumbent died in 2013. He had learned the rudiments of providing emergency humanitarian aid at the grass roots from international agencies.

Violence again broke out in October 2008 after the Supreme Court issued an injunction against the signing of the Memorandum of Agreement on Ancestral Domain (MOA-AD), the culmination of 11 years of negotiations in Kuala Lumpur under the auspices of the Malaysian government.

The extraordinary document outlining the setting up of a Bangsamoro Juridical Entity was envisioned to be the comprehensive compact, or final peace treaty, on the Moro rebellion that had claimed more than 120,000 lives and wrecked the homes of millions.

“That is the genuine road map to peace,” the mayor of Pagalungan said of the BBL, echoing the sentiment of Mayor Sam Dimaukom and the displaced at a roadside encampment shaded by coconut trees at Barangay Timbangan in Shariff Aguak.

Out of harm’s way

Around 50 families were under plastic sheets on a sunny Tuesday afternoon, some of them given out by aid agencies to those who had fled the Kato and Bravo rampage in 2008. It was sweltering hot and women and children were sweating in their tents.

Rhea Mangulamas, 26, heavy with her fifth child, was fanning a toddler sleeping on her lap. She was waiting for her husband, a part-time carpenter and driver of a “Skylab”—a motorcycle with an extra wooden seat—to bring lunch to the family. She had never gone past high school and said her only ambition in life was to see to it that her kids get a proper education.

Baital Sulba, who was clueless about her age, was, like others in the camp, anxious to go home to her thatched hut. “I have evacuated so many times,” she said, first as a teenager during World War II. “I am used to it.” But she said it was a lot hotter this time under the tent.

Get on with it

The displaced didn’t take with them their possessions when they scampered for safety. The military offensive began in the midst of the harvest season and by last count had covered 11 municipalities in Maguindanao. Along the roads, palay was drying under the sun. Women in the camps were allowed to go back to their farms during the day and bring food to their families.

“Please let the government know that if a military solution is needed, let them get on with it, then let the people go home,” said Emadia Upam, 39.

Benito also shrugged off claims by lawmakers that certain provisions in the Bangsamoro Basic Law are unconstitutional, saying that his commission, which drafted the charter of the proposed substate, conformed to the spirit of the Philippine Constitution.

Eighteen members of the 1986 Constitutional Commission that drafted the Philippine Constitution following the ouster of the dictator Ferdinand Marcos and the installation of President Corazon Aquino have suggested as much in paid advertisements that were published recently in Manila’s newspapers.

“It actually supports our stand and the stand of Malacañang that the drafted basic law can be accommodated by the spirit of the Constitution,” he said from his modest two-story concrete house near the university in Marawi.

“I for one believe that the Constitution as a social contract must be subservient to the national interest,” he said. “The basic interest of the commission is to achieve peace, not only in Mindanao but throughout the country,” he said.

“We are tired of war. For us to achieve peace, everyone is determined to go the extra mile,” he said. “I am confident.”

That is what Mayor Sam Dimaukom is determined to do in proposing a zone of peace in his municipality, sending a strong signal by attempting to paint everything in his path with his and his wife’s favorite shocking pink.