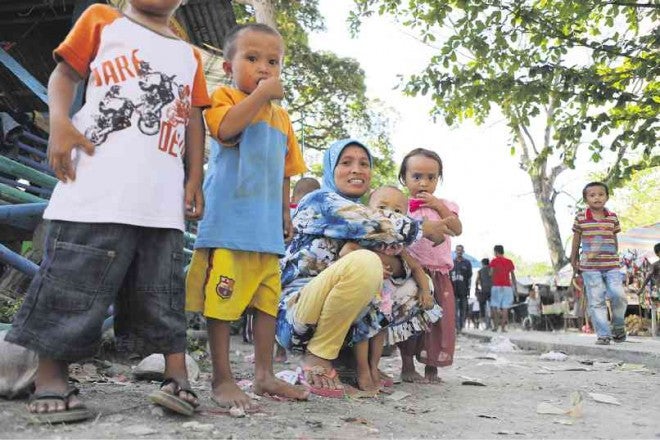 WOMEN and children displaced by a military campaign against the Bangsamoro Islamic Freedom Fighters have sought shelter at a public elementary school in Datu Saudi Ampatuan in Maguindanao province. The number of evacuees has reportedly reached over 123,000.JEOFFREY MAITEM/INQUIRER MINDANAO

Marwan was slain by the SAF commandos, but Baco and Usman escaped.

Close to 22,000 families are being hosted in 75 evacuation camps, while the rest are staying in the homes of relatives.

In the town of Shariff Saydona Mustapha, 2,670 families were displaced, while 2,637 families evacuated Mamasapano.

A total of 555 families from Mamasapano sought shelter in the nearby town of Rajah Buayan.

The evacuees are occupying makeshift tents in areas identified as “safe battle sites.”

The ARMM-Heart has been distributing relief packs, containing rice, instant noodles and canned sardines, for each family. Each food pack is expected to last four days.

In Davao City, nongovernment groups have called on the military to stop its offensive to prevent a humanitarian crisis.

On Tuesday, at least 10 peace networks, united under the umbrella campaign, All-out Peace, issued an “urgent humanitarian appeal” for the suspension of military operation, saying the fighting was displacing civilians.

Among the signatories of the statement of appeal are Initiatives for International Dialogue, Caucus of Development NGO Networks and Consortium of Bangsamoro Civil Society.

“We express our gravest concern over the glaring civilian protection and safety issues caused by the operation … . We are alarmed about the use of artillery shelling and air strikes with bombs reportedly dropped near civilian homes,” the statement said.

“We categorically state that a humanitarian crisis is already staring us in the face as an effect of the prolonged military action against [the] lawless elements.”

In another statement, Sen. Bam Aquino urged the government to ensure the safety of people displaced by the military operations.

“Their needs must be immediately addressed, including temporary shelter, food, water, clothing, alternative livelihood, among others. The government must zero in on the welfare of the children, who are the most affected and vulnerable during armed conflict, by providing them milk, medicine, psychosocial intervention and others,” Aquino said.
RELATED STORY