Battle-weary Maguindanao mother asks: When will this stop? | Inquirer News 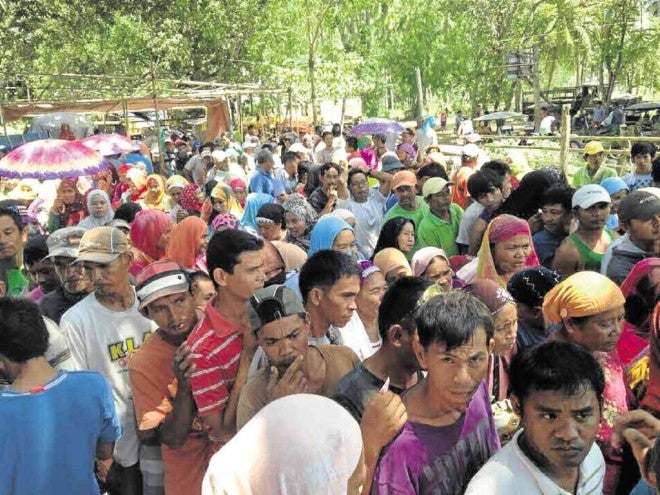 FOOD AID Relief workers of the Autonomous Region in Muslim Mindanao distribute food packs to evacuees in Barangay Timbangan in Shariff Aguak, Maguindanao province. PHOTO CONTRIBUTED BY THE OFFICE OF THE CIVIL DEFENSE IN THE AUTONOMOUS REGION IN MUSLIMMINDANAO

COTABATO CITY, Philippines – Twenty-eight-year-old Lenny Anayatin fled from her home in the middle of the night, crossing rivers as mortars landed a few hundred meters away.

“It was very difficult for me fleeing with my two-month-old baby. We needed to cross rivers carrying our only valuables,” Anayatin told reporters, adding that she and her family was awakened by loud explosions Saturday night.

She said village officials of Shariff Saydona ordered them to evacuate the soonest because the military was hunting down lawless elements in Shariff Saydona.

“We were forced to evacuate. We have no choice lest we all die here,” she said in Filipino. “My child is too young to experience evacuation.”

“We walked for three kilometers and had to cross rivers in the middle of the night,” she said.

Good enough she had a neighbor who gave her a space in a motorboat “because I was carrying a baby.” The boat was already loaded with children of other fleeing families.

Like other evacuees from Barangay Ganta, Shariff Saydona, Bai Zahara Alim had to cross rivers with her children and the family-owned carabao.

“Since I was a child, my family has been in this situation — we flee, return home and rebuild our lives then we evacuate again. It has become a cycle. When will this end?” Alim, 30, said.

Delmo Sali, another evacuee, said he and his family left in haste, leaving some of the family-owned valuables.

“We do not have a cooking pot, we have no utensils, we only have few clothes and have no money at all,” Sali said.

“The soldiers told us to evacuate, who are we not to obey because our life are at stake,” he said in broken Filipino.

“The number of IDPs may rise as more and more people are fleeing,” Alamia said Monday morning.

“The situation is getting worse,” Mayor Zamzamin Ampatuan of Rajah Buayan town said.

“There is no military action in Rajah Buayan but people are coming because they feel safe here,” he said, adding that civilians from nearby Mamasapano and Shariff Saydona towns have moved to his town.

Alamia said that as of Monday morning, 5,727 families or 28,635 individuals have been housed in various evacuation centers like barangay halls, covered courts, schools and roadsides.

Alamia, who chairs the ARMM Humanitarian Emergency Action and Response Team (HEART), the region’s emergency response unit, said classes both in elementary and high school in seven towns were also suspended beginning on Monday (Mar. 2) as schools have been turned into evacuation sites.

Mayor Benzar Ampatuan of Mamasapano said at least eight villages in his town were also deserted, including Tukanalipao and Pedsandawan, site of bloody clash between the Special Action Force commandos of the Philippine National Police and the Moro Islamic Liberation Front as well as the Bangsamoro Islamic Freedom Fighters last January 25.

“People do not feel safe in their communities so they fled, especially after they learned about the presence of BIFF in their villages,” Mayor Benzar Ampatuan said.

As of Sunday, the ARMM-HEART served 2,400 families among the validated and confirmed IDPs in seven Maguindanao towns.

Alamia believed the number of IDPs could still rise as people have been coming out of interior villages in Maguindanao.

“We expect more diseases among children and elderly because the situation in evacuation sites, as we all know, is a health hazard,” Sulaik said.

Alamia said the ARMM-HEART would intensify its emergency relief distribution. She said each family would get relief packs consisting of rice, noodles, canned goods and mosquito nets.