No TRO for Junjun Binay; Roxas dared to serve order 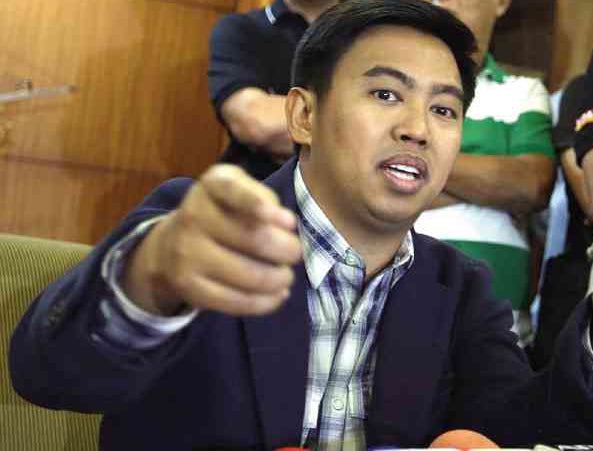 THERE YOU GO Makati City Mayor Jejomar Erwin “Junjun” Binay answers questions from the media during a press conference at Makati City Hall, where he has holed up since Wednesday night. EDWIN BACASMAS

Makati Mayor Jejomar Erwin “Junjun” Binay will be sleeping on his office sofa a little longer as no court injunction is forthcoming this weekend.

The Court of Appeals ended business late Friday afternoon without resolving the suspended mayor’s certiorari petition asking the court to issue a temporary restraining order (TRO) stopping the Ombudsman from suspending him preventively.

“Why does it have to be the (Southern Police District) or the Makati police district (sic) that will serve the suspension order, when Roxas was the one directed to do that? He should come here. If he believes what he’s doing is right, he should not order other people (to do the job),” Navotas Rep. Toby Tiangco, the UNA interim president, said in a press conference at the Makati City Hall.

JV Bautista, the UNA interim secretary general, said the directive for Roxas to serve the suspension was “clearly and categorically stated” on page 11 of the Ombudsman’s order.

“In other words, the Ombudsman is not telling the department to do it. It is directing and ordering Roxas to do it. So (Mar) Roxas … do it. If you’re really a man, you come here and serve the order per the order of (the Ombudsman),” he said.

Roxas laughingly dismissed as mere “drama” the occurrences at the Makati City Hall and the mayor’s defiance of the preventive suspension issued against him.

“(It’s a) high school adolescent perspective,” Roxas said in answer to a question at a news briefing on the board of inquiry Mamasapano report at Camp Crame on Friday.

He was referring to the warning from his political nemesis, the Vice President, that a “misencounter” could occur if the Department of the Interior and Local Government (DILG) insists on enforcing the suspension order.

“The people are now witnessing the kind of mentality of those who are suggesting this (misencounter). It’s as if they are in high school. Governance is a serious matter,” Roxas said.

He called on the public to “stay calm” and to respect the Ombudsman’s resolution.

The Ombudsman had ordered Junjun Binay, the only son of Vice President Jejomar Binay, to be suspended for six months while he is being investigated for his alleged involvement in the allegedly overpriced construction of the Makati City Hall Building II. Twenty other Makati City officials and employees were also ordered suspended.

The openly defiant Binay immediately sought relief from the appellate court to stop his temporary removal, naming Ombudsman Conchita Carpio Morales and the DILG as respondents.

He accused Morales of committing grave abuse of discretion in ordering his preventive suspension.

According to the appellate court’s information office, Binay’s case was raffled yesterday to the Sixth Division, chaired by Associate Justice Jose Reyes Jr. The two members of the division are Associate Justices Eduardo Peralta Jr. and Francisco Acosta.

Sen. Antonio Trillanes IV, who initiated the Senate inquiry into the the alleged overpricing of the Makati City Hall Building II and other allegedly corrupt practices of the Binay family, said there is a sinister motive in Binay’s refusal to temporarily vacate City Hall.

Trillanes suspects that Binay and his associates are tampering with or destroying incriminating documents.

“The real reason that Mayor Binay refuses to leave his post is because they are still doctoring the documents to hide the money they stole from Makati,” he said in a statement.

The building project was initiated when the Vice President was still mayor of Makati and completed under his successor, his son.

Binay has refused to leave his office on the 21st floor of the Makati City Hall, insisting that he had a right to continue performing his duties as an elected official. He was photographed on Thursday showing the media the sofa in his office on which he had ostensibly slept. His entire family, including his father, also reportedly slept over at City Hall on Wednesday.

About a thousand of the Binays’ supporters have been standing vigil at the City Hall quadrangle since Wednesday, to stop any DILG official or police from enforcing the suspension order.

He invoked “judicial courtesy,” which he said meant that his petition for a TRO should be given “due course.”

Binay said his camp had received a report about a plan to file a “series of cases again” and “probably eliminate the whole council.”

He said there was a plan to put a “caretaker officer in charge as mayor.”

Asked if he was prepared for a possible scenario in which Makati Vice Mayor Romulo Peña Jr. could be sworn in as mayor, he said that that “was beyond (his) control.”

In a statement e-mailed to reporters, Peña, a member of the ruling Liberal Party, said he was “ready to fulfill his sworn duty according to the prevailing law.”

“You can be assured of the continuous programs, projects and benefits for the residents of Makati,” he said.

“The Ombudsman said there is enough evidence to suspend Mayor Binay for stealing from the state coffers. The PNP (Philippine National Police) and the DILG, we’ll just do our job,” Roxas said.

He said the DILG and the PNP would comply with the Ombudsman’s instructions to serve the order against Binay within five days, but did not say exactly when.

He said the Ombudsman’s March 10 resolution was immediately executory.

Roxas pointed out that his department had routinely implemented suspension orders against policemen and local government officials ordered suspended by the Ombudsman.

Roxas also expressed concern over the effect of the standoff at the Makati City Hall, saying people wanting to transact business with the city government had been affected by the situation.

“How many people cannot transact (at City Hall) because of this drama? Are we a government of laws? Or are there those exempted from the laws? There is a system of laws existing in our county,” he said.

Unusually stringent measures were implemented at Makati City Hall on Friday. The huge glass doors that serve as the main entrance to the building no longer stood out as they do on ordinary days, as a metallic gate had been rolled down to cover much of it.

Inside the building, the elevators that once went up to the 22nd floor, now only reached the 17th floor. Those who had to go to the 21st floor, where the mayor’s office is, for example, had to use the stairs from the 17th floor.

Once on the 21st floor, to get to the offices, people had to pass through a fire emergency exit and had to be screened by security personnel there.

Just before lunch, one of the security personnel could be seen distributing orange stickers.

“Only employees and some supporters can enter with a sticker,” said the guard who refused to be identified.

Asked what the criteria were for determining which supporters would be given stickers, he said those who were endorsed by the barangay captain were given the stickers.

To get to the mayor’s office, people had to go through a second screening by a different set of security personnel.

But Joey Salgado, Makati City spokesperson, said the implementation of the measures had nothing to do with the expected arrival of authorities who would serve the suspension order.

He said the measures were implemented as “security precautions” because the city government had received reports that there were some people planning to “start a commotion” inside the City Hall.

Salgado said City Hall was still open and that it was “business as usual” since “most of the frontline offices” where residents transact business are in another building that was not affected by the standoff.

“We are apologizing to people because it’s a bit slow (the operations) but they will be accommodated,” he said.

Just before noon, Salgado announced that city court operations would be suspended after lunch, but claimed that this was the decision of the executive judge who texted the local court personnel.

When asked if authorities serving the suspension order would be allowed in, Salgado said “No.”

Asked if the present setup at City Hall would last until the Court of Appeals acts on Binay’s petition for a TRO, he said “Yes.” With a report from Leila Salaverria