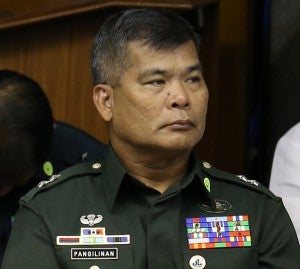 The commander of the Army unit in Central Mindanao put primacy to the government’s peace negotiations with Moro rebels over the lives of the Special Action Force (SAF) commandos.

This was among the telling findings of the Philippine National Police board of inquiry that looked into the bungled SAF mission to get wanted Malaysian bomb maker Zulkifli bin Hir, alias “Marwan,” and two of his trusted henchmen in Mamasapano, Maguindanao province, on Jan. 25.

“Artillery support from the 6th Infantry Division of the Philippine Army was not delivered when needed most because (Pangilinan) considered the ongoing peace process and protocols in the use of artillery,” the board said.

It said artillery fire from the local military unit “was factored in as one of the mitigating actions of the SAF” to launch the mission.

“In consideration of the peace process, the AFP (Armed Forces of the Philippines) did not deliver the artillery fire support… and (in) the absence of compliance with the required protocol,” the report said.

As part of its protocol, it said the military required “prior coordination to enable them to react and deliver the requested support.”

It turned out, however, that Purisima had just asked Lt. Gen. Rustico Guerrero, commander of the AFP Western Mindanao Command, for artillery fire at 7:07 a.m. of Jan. 25, or more than an hour after the gun battle between the Moro rebels and the police troopers had started.

The board said the AFP eventually sent infantry and mechanized units to help extricate the SAF commandos who were pinned down in a cornfield in Tukanalipao village.

“White phosphorous artillery rounds were fired late in the afternoon. However, by then, all of the 55th SAC (Special Action Company) lay dead except for one who was able to escape,” the board said.

Pangilinan could not be reached for comment on Friday, but Guerrero said that as far as he knew Pangilinan “never invoked the peace process as a reason” for not delivering the requested artillery support.

Guerrero said Pangilinan’s action was based on the “doctrinal use of artillery.”

No instruction from Aquino

The board of inquiry said in its report that there was no “clear or decisive instruction” from the President to take the peace negotiations into account in planning the SAF mission.

It said the implications of the mission and its effects on the peace agreement and the passage of the proposed Bangsamoro Basic Law “should have been considered in the planning and execution” of the operation. With a report from Julie Alipala, Inquirer Mindanao

Napeñas had ‘no sense of urgency’ during Mamasapano clash—military exec

Read Next
At a glance: Aquino and Oplan Exodus
EDITORS' PICK
‘House of Kobe’ launched in Valenzuela City hours before hoops star’s death
SM continues to send relief assistance to remote towns in Batangas
Get exciting deals and discounts when you download the new McDonald’s App
4 Ways Jollibee’s new store will serve a leveled-up kind of joy to Filipinos in the South
In appreciation: Kobe Bryant, a life defined by hard work
DOH warns vs eating raw meat, exotic animals amid coronavirus outbreak
MOST READ
Kobe Bryant’s helicopter flew in fog that grounded other choppers
College baseball coach, wife and daughter die in crash that killed Kobe
3 Chinese admitted to San Lazaro Hospital after showing signs of flu
Kobe Bryant’s daughter Gianna also killed in crash
Don't miss out on the latest news and information.