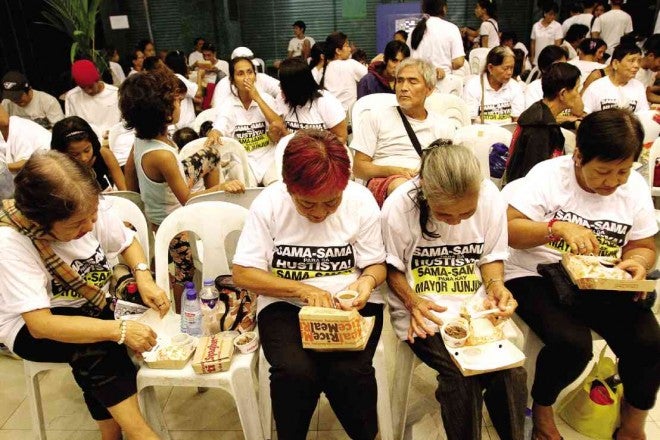 EAT YOUR HEARTS OUT Supporters of Makati City Mayor Jejomar Erwin “Junjun” Binay break bread during the festive vigil at the Makati City Hall Quadrangle now in lockdown mode following the Ombudsman’s suspension order issued last Wednesday. The Court of Appeals as of Friday had not resolved Binay’s petition for a temporary restraining order stopping the Ombudsman’s preventive suspension for six months. RICHARD A. REYES

The movies, packed lunches, flowing coffee and T-shirt giveaways kept the crowd glued to their seats on the grounds of the City Hall, where the vigil for embattled Makati Mayor Jejomar Erwin “Junjun” Binay continued to be festive on Friday, despite the threat of a six-month preventive suspension order being served on the mayor and other city officials.

The Office of the Ombudsman ordered the suspension on Wednesday over alleged irregularities in the construction of a Makati parking building, an order that the mayor had defied, vowing to stay in office until all legal remedies were exhausted.

Late Friday, the Court of Appeals denied Binay’s appeal for a temporary restraining order on the six-month suspension without pay.

But for most of Friday, loud campaign music used by the mayor’s father, Vice President Jejomar Binay, in the 2010 presidential elections played in the background, as Makati residents streamed in from various barangays to catch the FPJ movies and other entertainment numbers.

By midday, a Zumba instructor had taken over the makeshift stage, leading a clutch of middle-aged women in upbeat dance numbers as they faced the crowd in T-shirts scoring the mayor’s suspension.

Jommel Sancha, 43, a resident of Barangay Rembo, camped out on the City Hall grounds because he was “mainly curious about what was happening,” he said.

At the same time, Sancha said it wouldn’t be right for the younger Binay to step down from office. “Mali naman ’yun. Dahil lang ’yan sa pulitika (It isn’t right. It’s just politicking)” he said.

Others who trooped to the City Hall grounds cited utang na loob or debt of gratitude, saying they owe the Binays a lot.

“Here in Makati, you get everything for free: free medicine, free education, cake and allowance if you are a senior citizen, and even burial services for the poor,” said Lilia Escarlan, 72, whose husband makes a living from scavenging garbage.

She, however, acknowledged that the allegations of corruption against the Binays could be true. “(The mayor is) not a tightwad regarding the needs of the people,” Escarlan said, while lining up for the free coffee being offered in one tent.

“We don’t have money, but at least we have food and coffee here. We don’t get hungry,” she said, adding, “we will not leave. We will support our mayor all the way.”

Grace Salubre, 34, of Barangay Southside, said it was Mayor Binay who insisted that their barangay be part of Makati in the territorial squabble between Makati and Taguig City.

Most of those who joined the vigil starting Wednesday when the suspension order was released slept wherever they could on the grounds of the City Hall, others went home for the night and returned the following day.

A group of supporters guarded the first floor of the City Hall building, with one woman leading the others in chanting. “Binay kami, Binay kami!”

Joey Salgado, spokesperson for both the Makati mayor and the vice president, said the program was being organized by the city’s barangay captains while the food and drinks were donated by supporters.

Angel Llanesa, a consultant at Barangay Carmona, said the entertainment numbers and movie screenings were staged to keep the people entertained and help them “kill time,” since “Makati residents are not radicals.”

He added: “We don’t want any tension. The barangay leaders just want (the program) to be entertaining. It’s anything goes—anyone who wants to sing or dance can just go onstage.”

But while the vigil was being supervised by the barangay captains and City Hall employees, the initiative came from the people, Llanesa said. “The people are behind this vigil; they want to extend their gratitude to the mayor for the benefits they’ve received from his programs.”

According to City Hall employees, Vice Mayor Romulo Peña Jr. was in his office at Makati City Hall, waiting to take over the mayoral post once the suspension order is served.

But “we will block them to prevent them from serving the notice,” Llanesa said.

In the know: Gov’t officials who defied suspension orders