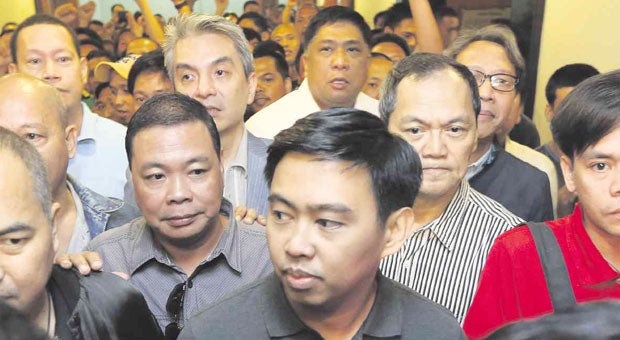 NO GO Surrounded by supporters, newly suspended Makati City Mayor Jejomar Erwin “Junjun” Binay makes his way to Makati City Hall, where he tells reporters he will continue to hold office until all legal remedies have been exhausted. The Ombudsman has ordered the six-month suspension without pay of Binay and 21 other city officials over alleged irregularities in the P1.2-billion construction of the parking building in Makati. NIÑO JESUS ORBETA

MANILA, Philippines–Despite the Office of the Ombudsman’s order suspending him for six months without pay, a defiant Makati Mayor Jejomar Erwin “Junjun” Binay said he would continue serving as head of the city until he had exhausted all available remedies.

Besides the mayor, the Ombudsman also ordered the suspension of 21 other City Hall officials in connection with the irregularities in the construction of the Makati City Hall Building II.

“I will continue discharging my duties as mayor until all legal remedies have been respected. While I may belong to the opposition, I am still entitled to my rights like any Filipino citizen,” said Binay in a press conference at Makati City Hall on Wednesday afternoon as his followers started massing outside preparing to dig in.

Binay said his legal counsels had filed a petition for certiorari in the Court of Appeals questioning the Ombudsman order.

Claro Certeza, a lawyer of the mayor, said Binay was asking for the issuance of a temporary restraining order (TRO).

“And we believe that until such time that our prayer for TRO is decided upon, they cannot remove Mayor Binay from his post as he is duly elected by hundreds and thousands of Makati residents,” Certeza said.

Citing Section 27 of Republic Act No. 6770, or the Ombudsman Act of 1989, Ombudsman Conchita Carpio Morales said the resolution was “immediately executory.”

“Notwithstanding any motion, appeal or petition that may be filed by respondents seeking relief from this order, unless otherwise ordered by this office or by any court of competent jurisdiction, the implementation of this order shall not be interrupted within the period prescribed,” Morales said.

“In case of delay in the disposition of these cases due to the fault, negligence or any cause attributable to respondents, the period of such delay shall not be counted in computing the period of suspension,” she added.