Ramos: Aquino does not sound presidential 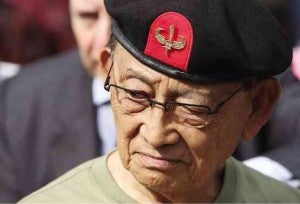 Former President Fidel V. Ramos would like to know.

On Wednesday, Ramos said he was disappointed at Aquino’s speech on the Mamasapano clash on Monday, describing it as less than the “high standard of behavior” required of the Commander in Chief.

Ramos also criticized the President’s advisers for their failure to maintain the dignity of the Office of the President.

Ramos said Aquino’s advisers “failed in their mission to keep the President of our country up there, instead of being the target now of all kinds of criticism high and low.”

He added that he observed this failure not only in the President’s meeting with evangelical leaders, in Malacañang on Monday, but also in other previous instances.

While the public was urging Aquino to take responsibility for the tragedy as Commander in Chief, he dumped the blame on Napeñas, saying the former SAF chief disobeyed his order to coordinate the operation with the military.

Speaking to reporters at Ninoy Aquino International Airport Terminal 1 minutes before boarding his flight to Burma (Myanmar), Ramos said he was “so disappointed with the language used” by Aquino.

“If that (language) were used in a meeting of group of international leaders or even just ordinary foreigners visiting our country, the impact, including the message given, would have been so negative for our country,” he said.

According to the former President, Aquino is not just the father of the nation or just the Commander in Chief of the uniformed services, but is also the “navigator” of the country.

“We are on board one ship and therefore our lives, including those of our families and the unborn, depend on this man called the President and as such he has a certain high standard of behavior, even paternal feelings and even leadership ascendancy over everyone in this country,” he said.