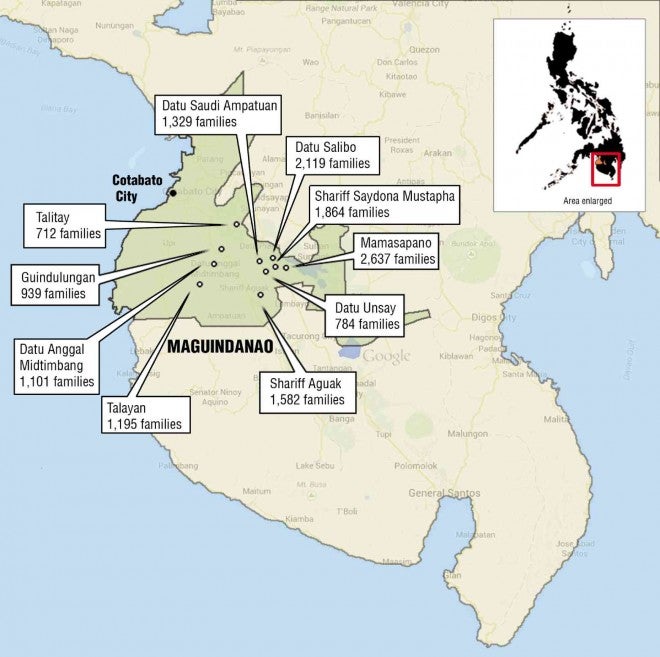 DAVAO CITY—Government spending for villagers who are fleeing the military’s all-out war on Bangsamoro Islamic Freedom Fighters (BIFF) has doubled to P2 million a day and is growing as more and more people are fleeing clashes between government soldiers and BIFF guerrillas in Maguindanao province.

As of Wednesday, at least 72,500 residents have fled their homes and are now staying in evacuation centers, according to the Autonomous Region in Muslim Mindanao’s Humanitarian Emergency Action and Response Team (ARMM-HEART).

ARMM-HEART, the regional government’s humanitarian response agency, said the fighting has affected 11 towns in the province.

As of Wednesday, at least 72,500 residents have fled their homes and are now staying in evacuation centers, according to ARMM-HEART.

The number of people represents at least 14,517 families in the 11 towns.

The cost, however, excludes “logistical and operational

Each food pack consists of rice, instant noodles and canned sardines, which authorities said are expected to last for three to four days per family.

Based on a budget of P450 per food pack per family, the government needs at least P1.9 million a day for the food supply.

Alamia said while the regional government is ready to provide aid to evacuees, it might run out of supply if the military operation against BIFF is prolonged.

ARMM Gov. Mujiv Hataman admitted supply of food would dwindle if the war on BIFF went beyond June.

The evacuees, however, said the food supply is barely enough for their families.

“Thank you for the weekly ration, but the rice, noodles, sardines and other foods are not sufficient for the week,” said 42-year old Noria Ebrahim, of Barangay (village) Kalamis, Guindulungan, mother of six and an evacuee.

Guindulungan Mayor Midpantao Midtimbang said the recent announcement by the provincial government declaring a state of calamity in Maguindanao would help.

Mike Midtimbang, provincial board member, said the board passed a resolution allotting funds for the state of emergency declaration. He, however, could not give an exact figure.

Mayor Tungkang Midtimbang, of Talayan town, said an average of P60,000 a month will have to be withdrawn from the town’s coffers to attend to the needs of at least 2,000 residents displaced by the fighting if the war is prolonged.

Hataman said while the regional government has P80 million in special contingency funds, these may run out soon if the war continued.

If the fighting is prolonged, Hataman said the region would need more than P12 million a week and would have to seek outside help to sustain the evacuees’ needs. Charlie C. Senase and Karlos Manlupig, Inquirer Mindanao