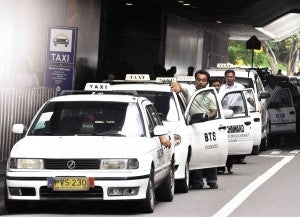 MANILA, Philippines–An executive of the Land Transportation Franchising and Regulatory Board (LTFRB) announced Friday a P10-rollback in the flag-down rate for taxis nationwide.

LTFRB board member Ariel Inton told INQUIRER.net in a phone interview that the P10-rollback, which will bring the flag-down rate from the current P40 down to P30, starting March 9.

Inton clarified that P40 would still appear on the taxi meter but the passengers would have to pay P10 less in their actual fare.

He explained that this is because the rollback is only provisional.

The LTFRB official warned that the taxi drivers who would violate the rollback would be apprehended.

Taxi group can only take P5 cut in flag-down rate