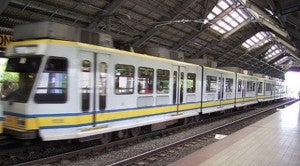 In January, the LRT and the Metro Rail Transit (MRT-3) increased their rates after the move had been deferred several times.

The Department of Transportation and Communications has said that the increased fares would pave way for marked improvements in the railway services.

“With the fare hike, the ridership of the LRT Line 1 has gone down according to the data that we have,” Robles told INQUIRER.net in an interview at the sidelines of a forum on Thursday.

During the forum, a commuters’ group assailed the increase in fare rates of the MRT and the LRT, and the privatization of the country’s elevated railway systems.

Robles said the passengers who opted not to use the MRT went on the “ground” or on the streets of Metro Manila, riding public utility vehicles.

“Now they have to endure traffic,” he said, citing the inefficiency of the government to “serve the people” through an efficient mass transport is adding to the metro’s traffic problems.

He said the LRT passengers now have to spend more time going to their destinations.

“So everybody now is affected. Everybody is losing productive time,” he said.

According to him, the government has enough funds to subsidize the continuous operations of the LRT and the MRT-3.

“I believe the government can in fact offer free rides,” he said.