Taxi group can only take P5 cut in flag-down rate 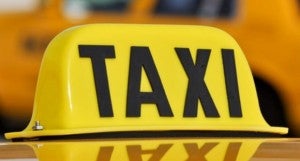 MANILA, Philippines—The head of a nationwide organization of taxi operators said his group is amenable to a P5 reduction in the flag down rate but not to the P10 cut being pushed by Negros Oriental Rep. Manuel Iway.

“Reducing the taxi flag-down rate to P5 instead of P10 may be acceptable,” said Suntay, who is also a Quezon City councilor, during the first hearing conducted by Land Transportation Franchising and Regulatory Board (LTFRB) on the fare cut petition.

Iway filed a petition in the LTFRB last month to reduce the taxi flag-down rate from the current P40 to P30, and slash by P1 the P3.50 charged for every 300 meters that follow or per 2-minute waiting time.

He later made a supplemental petition asking the board to also cut by P10 the current airport taxi fare of P70 for the first 500 meters and by P1 the P4 charged for every 300 meters. The lawmaker also asked that the P2 charged by UV Express taxis be reduced to P1.80.

Iway attended Friday’s hearing but it was his counsel, Benjamin Ramon Rosales, who spoke for him during the proceedings.

“It is public knowledge that fuel prices have significantly dropped in the past several months.” Rosales said. “It is about time that the board reduce the flag-down rate of taxis and the succeeding kilometers.”

But Joseph Vincent Go, owner of Light of Glory Transport Services, argued: “The petition is anchored solely on the price of fuel for this year. But the price of fuel is not the sole determining factor for fares.”

Given the increase in the prices of basic commodities, automotive spare parts and transport regulatory fees, a fare reduction is uncalled for, Go stressed.

Go also recalled that the price of gasoline climbed to P60 last year and yet drivers and operators did not ask for a fare increase. “Let’s give them enough time to recover from what they have lost during that period…This is our only time to recover and earn enough for our daily needs.”

According to Suntay, the worsening traffic situation in Metro Manila has also reduced the average number of passengers taxi drivers can convey in a shift, from around 40 to only 30.