What to do with MILF’s Mamasapano probe report? Group will give it to Malaysia | Inquirer News
Close
menu
search

What to do with MILF’s Mamasapano probe report? Group will give it to Malaysia 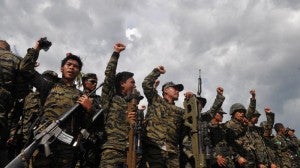 “This has been the only ceasefire breakdown since 2011. And then there are the circumstances of how it happened. They made an investigation. It’s internal. To whom should they give it? There is no defined process,” UP Political Science professor Miriam Coronel-Ferrer, government peace panel chair, said in a seminar of the National Union of Journalists of the Philippines in Batangas.

“We don’t know the process even for everybody, the CHR (Commission on Human Rights), the DOJ (Department of Justice). The BOI (Board of Inquiry) also has a study. Where will it go and does the buck stop there?” Ferrer said.

Ferrer said the government panel would wait for the MILF’s official communication regarding its report, warning investigating bodies and media practitioners against releasing piecemeal information.

“We need prudence in how all these tidbits of information are coming out, especially because there are security considerations. It may unnecessarily endanger certain individuals. At the same time, the biases, the misinformation are being reinforced,” Ferrer said.