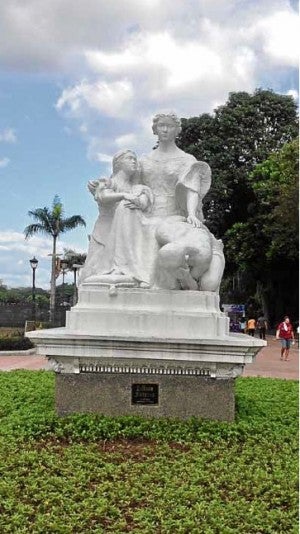 THIS La Madre Filipina statue stands at Luneta Park. Two
other statues are at the Court of Appeals. JEROME ANING

MANILA, Philippines–The La Madre Filipina, one of the numerous monuments at Manila’s Rizal Park, depicts the Philippines as a caring mother, patting a pensive girl and consoling a weeping boy.

The white-washed statue, however, has a dark past. Unknown to many, it was a silent witness to the monthlong Battle of Manila, the Allied liberation of the Japanese-occupied Philippine capital during World War II.

The Battle of Manila ended on March 3, 1945—70 years ago today—after the last Japanese holdouts at the Finance building were eradicated and the American military reported that all Japanese resistance in the city had ceased.

The La Madre Filipina’s original location was not even at Rizal Park. And there were four such statues. The set of allegorical sculptures used to sit atop posts on both ends of the pre-war Jones Bridge across the Pasig River.

The then neoclassical arch bridge, designed by Juan Arellano, was blown up by the Japanese as the Allied troops advanced towards Manila. All but three of the La Madre pieces survived the monthlong battle.

The missing statue was believed to have been blasted to bits or is now lying at the bottom of the Pasig River. Thanks to an old Japanese occupation photo and the 1938 video “Manila, Queen of the Pacific” on YouTube, we know the missing La Madre Filipina carried a torch and a potted flowering plant, with two boys at her side raising a wreath.

The two other pieces—now painted bronze—stand in front of the Court of Appeals building on Maria Orosa Street in Ermita. One shows La Madre carrying a torch while tending to a playing child and an older boy; the other shows her with two genuflecting youths bearing instruments.

Architect Richard Tuason Sanchez Bautista, conservationist and researcher, said the personification of the Philippines as a mother was very popular in the old days, side by side with that of the Filipino everyman Juan de la Cruz.

“In expressing our patriotism, we conceive of our country as female and as a mother—the ‘Inang Bayan.’ This is also the influence of the babaylans (pre-Hispanic pagan ruling priestesses) and the Spaniards who regarded Spain as the mother and the Philippines as her daughter. The La Madre Filipina thus reminds us of mothers and of our motherland,” Bautista told the Inquirer in an interview.

What happened to the La Madre Filipina sculptures is an embodiment of the non-human casualties of the Battle of Manila—irreplaceable cultural and historical treasures and patrimony important not only to the city but to the entire country.

The losses, according to Bautista, are expressed in the nostalgia and painful remembrances by the people who walked in pre-war Manila.

A member and officer of the Heritage Conservation Society, Bautista said remembering the destruction of buildings, artifacts and art pieces should be placed on a different level from the commemorations of the lives lost in the urban fighting, crossfire and atrocities.

“The losses in terms of cultural and historical heritage should not be compared to the human lives lost. Lives are more precious. However, the destruction of old churches, ornate houses, religious statuary, rare books and the like did have an impact on the country’s heritage. It’s like having parts of your soul ripped out. Manila was never the same again,” Bautista said.

The National Museum of the Philippines, housed in the old Legislative Building, was “ground zero” of the destruction of Manila’s cultural and historical heritage. It lost about 2,500 paintings, sculptures and other historical and artistic items, including the original 1898 Declaration of Philippine Independence, the original National Anthem composition of Julian Felipe and even the supposed bones of the revolutionary leader Andres Bonifacio.

The National Library lost more than 300,000 books and more than 25,000 journals and pamphlets. The University of the Philippines library lost 200,000 assorted volumes while the Supreme Court library lost 20,000 legal tomes.

The then Bureau of Sciences in Ermita also suffered—the herbarium and botanical library, with over a million specimens, several thousand of which come from Philippines species, went up in smoke.

The archaeological and manuscript collection of anthropologist Henry Otley Beyer housed at the bureau were also destroyed.

The nearby Weather Bureau, which was the old Jesuit Manila Observatory, lost all its instruments and records. It did not become operational until four months after the battle of Manila.

After the government, the Catholic Church in Manila was said to be the institution that suffered the most from the war, particularly during Liberation. The Church’s material losses were centered in Intramuros, Manila’s oldest district and historic core, also known as the “Little Vatican” because of its many churches, chapels, shrines and convents.

“Intramuros was dying in the war years, because many of its rich residents had evacuated and the refugees and squatters were coming in. The destruction of the walls and buildings killed the district,” Bautista said.

Ancient churches were destroyed, and only the San Agustin Church, the country’s oldest, survived.

After Liberation, the Americans bulldozed many damaged buildings, several of which could have been repaired.

Bautista noted that the entire city did not “die” since suburbs such as San Miguel, Pandacan, Sta. Ana and Tondo were only partly devastated. He said the fact that the worst destruction took place in the Malate-Ermita-Intramuros area—which housed many government buildings, served as the center of religious authority, hosted major schools and was home to the social and intellectual elite—could explain why the loss is accentuated.

Preserving and conserving what’s left of Old Manila is an ongoing struggle as more pieces of information that add interest and value to a prewar building or object are unearthed.

Even the La Madre Filipina sculptures, already ensconced in their new homes, are not spared.