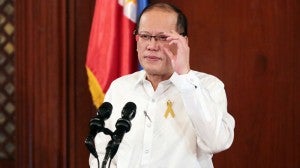 After a 7-minute “Unity Walk” by members of the Armed Forces of the Philippines (AFP) and the Philippine National Police (PNP), Aquino led the wreath-laying ceremony at the People Power Monument at the corner of Edsa and White Plains Avenue in Quezon City.

Around 1,000 people, mostly government employees and members of organizations, witnessed the ceremony.

A Mass, officiated by Manila Archbishop Luis Antonio Cardinal Tagle, was also to be held at the Shrine of Mary, Queen of Peace, Our Lady of Edsa.

Aquino was scheduled to give a short message before the final blessing.

Only 300 people can be accommodated in the chapel.