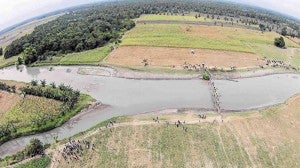 BIRD’S EYE VIEW OF KILLING FIELD The flat cornfields of Mamasapano town in Maguindanao province, where 44 commandos of the Philippine National Police Special Action Force were pinned down and killed on Jan. 25 in clashes with Moro rebels, as seen from a hovering drone. REM ZAMORA/INQUIRER

A total of 44 members of the elite Special Action Force (SAF) were killed in the incident, along with 18 rebels and five civilians.

In his testimony before the Senate, then SAF commander Director Getulio Napeñas said he insisted that the military fire artillery support for the embattled commandos, apparently owing to the superior number of opposing forces.

Napeñas insisted that his men might not have suffered so many casualties had the military fired heavy guns at the rebels.

But the military said it did not have the needed information to fire their howitzers at the attackers.

The BOI is currently in Maguindanao to conduct its own investigation on the incident.