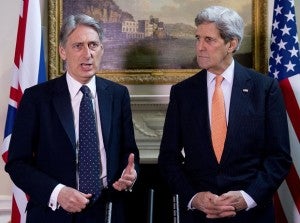 US Secretary of State John Kerry looks on during a press conference with Britain’s Foreign Secretary Philip Hammond, left, in central London Saturday Feb. 21, 2015. US Secretary of State John Kerry, in London for talks with Foreign Secretary Philip Hammond, said Russia’s conduct was “simply unacceptable” and that he expected to see agreement on further international sanctions in the coming days. “Russia has engaged in an absolutely brazen and cynical process over these last days. We know to a certainty what Russia has been providing to the separatists, how Russia is involved with the separatists,” he told reporters. AP

ZHOLOBOK, Ukraine – The United States warned Saturday it could level “serious sanctions” on Russia within days over breaches of Ukraine’s truce, which is in tatters despite pro-Moscow rebels and government forces exchanging scores of prisoners.

AFP journalists in Ukraine’s eastern frontline town of Zholobok saw 139 Ukrainian soldiers traded for 52 separatist fighters late Saturday, in rare compliance of the otherwise much-violated truce which came into effect a week ago.

Some of the released soldiers were wounded. A few had to walk on crutches through a landscape scarred and cratered by months of fighting.

The insurgents said the prisoners included some troops seized this week when they overran the strategic town of Debaltseve, located between Lugansk and the other rebel stronghold of Donetsk.

That bloody offensive — which killed 179 soldiers over the past month, according to one Ukrainian presidential aide — was the most egregious breach of the UN-backed ceasefire. Some 2,500 Ukrainian troops had to flee Debaltseve under heavy rebel fire, and at least 112 were taken prisoner.

The Debaltseve assault and more than 250 ceasefire violations attributed to pro-Moscow fighters prompted a furious reaction from the United States, which blames Russia for the 10-month conflict.

“If this failure continues, make no mistake, there will be further consequences including consequences that will place added strains on Russia’s already troubled economy,” US Secretary of State John Kerry stormed during a press conference in London.

He believed President Barack Obama will “in the next few days” decide on “additional steps (which) will be taken in response to the breach of this ceasefire.” He foresaw “serious sanctions” being imposed.

‘No illusions’ over truce

Germany and France, which brokered the Ukraine truce, admit they “don’t have any illusions” about the difficulty in getting the agreement to take hold, but say it is the only hope of calming the conflict enough to find a lasting solution.

Under the truce, both sides are meant to observe a ceasefire, withdraw heavy weapons from the frontline by March 3 and carry out a prisoner exchange.

If those steps are met, they are then to conduct negotiations on greater autonomy in rebel-held areas, and eventually restore Ukraine’s control over all of its border with Russia.

But Kiev and the rebels continue to trade accusations of shelling, mortar rounds and rocket strikes targeting their positions.

Ukrainian defense officials allege Russia has deployed 20 tanks towards the port city of Mariupol and said a dozen enemy reconnaissance drones have been shot down.

The rebels claim to have already pulled back weapons in some areas, but there was no confirmation from the Organization for Security and Cooperation in Europe (OSCE), which is monitoring the truce.

OSCE observers have been barred from entering Debaltseve to assess the situation, but the rebels promised they would finally be allowed in on Sunday.

Moscow is already laboring under several rounds of US and EU sanctions over the crisis. But while they have accelerated Russia’s slide towards recession, they have thus far failed to change President Vladimir Putin’s stance.

In one sign of the effects on Russia’s economy, rating agency Moody’s cut Moscow’s debt note by one notch into “junk” territory, just a month after its last downgrade.

The ex-leader has little support left in his home country, however, after it was discovered following his escape to Russia that he had been living lavishly, in a sumptuous palace with a private zoo, a replica pirate ship and pure gold fittings, while the country sank further into debt.