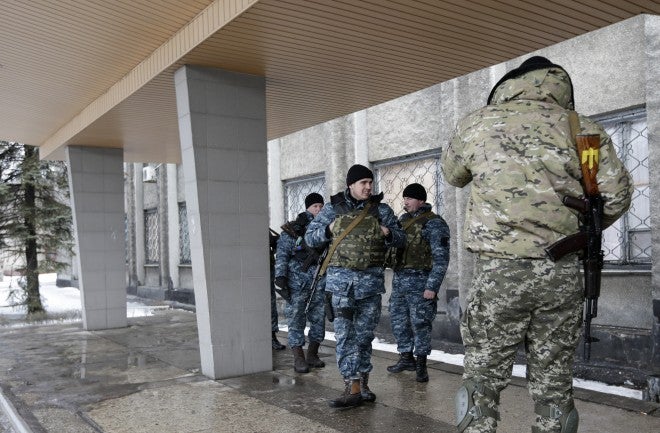 WASHINGTON, United States – US Vice President Joe Biden on Tuesday blamed separatist fighters and Russian forces as he condemned the violation of a three-day-old ceasefire in eastern Ukraine and warned of increased “costs” to Russia.

Biden “strongly condemned the violation of the ceasefire by separatist forces acting in concert with Russian forces, in and around the town of Debaltseve,” the White House said in a statement after he spoke with Ukrainian President Petro Poroshenko.

The leaders of France, Germany, Russia and Ukraine agreed a ceasefire deal last week in the Belarus capital Minsk to end fighting between government troops and pro-Russian rebels which has claimed more than 5,400 lives in the past year.

But separatists on Tuesday stormed the port town of Debaltseve, a violation of the ceasefire.

“If Russia continues to violate the Minsk agreements, including the most recent agreement signed on February 12, the costs to Russia will rise,” the White House statement added.

Biden and Poroshenko said the ceasefire violation was confirmed by the Special Monitoring Mission of the Organization for Security and Cooperation in Europe (OSCE).

“The vice president also strongly condemned Russia and the separatists for blocking access to Debaltseve by OSCE monitors, which is allowing the separatists to continue their attacks without inhibition,” the White House said.

Poroshenko, in a phone conversation with German Chancellor Angela Merkel, said the assault on Debaltseve, a strategic rail hub in Ukraine’s east, was a “cynical attack” on the truce brokered last week.

Read Next
Indonesia postpones transfer of drug convicts for execution
EDITORS' PICK
PH preps for China virus: Question of when, not if
Beyond water service: Maynilad builds massive infrastructure projects to clean up Metro Manila waterways
Museums ‘put to sleep,’ churches closed amid volcano’s unrest
Seventh judge assigned to handle De Lima case
SM continues to send relief assistance to remote towns in Batangas
Get exciting deals and discounts when you download the new McDonald’s App
MOST READ
Taal Volcano flexes signs of restiveness anew
Part of Aurora Boulevard in Cubao closed from Jan. 25 – Feb. 1
Passengers from Wuhan, China to be flown out of Kalibo, Aklan – CAAP
Lacson on Duterte’s threat to end VFA over Bato’s canceled visa: Where is the connection?
Don't miss out on the latest news and information.