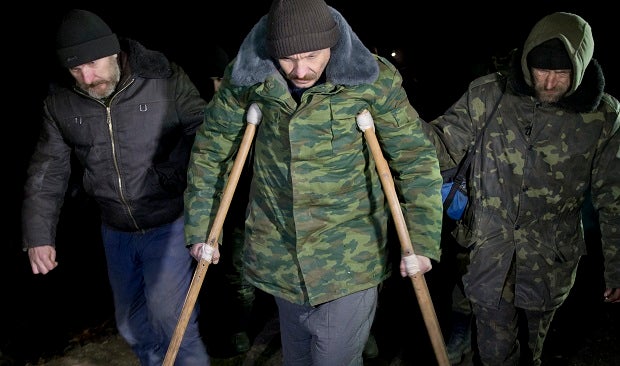 Ukrainian prisoners of war help an injured serviceman using crutches march before a prisoner exchange in separatist controlled territory, near Zholobok, Ukraine, Saturday, Feb. 21, 2015. Ukrainian military and separatist representatives exchanged dozens of prisoners under cover of darkness at a remote frontline location Saturday evening. 139 Ukrainian troops and 52 rebels were exchanged, according to a separatist official overseeing the prisoner swap at a no mans land location near the village of Zholobok, some 20 kilometers (12 miles) west of Luhansk. AP

ZHOLOBOK, Ukraine — Ukrainian military and separatist representatives exchanged dozens of prisoners under cover of darkness at a remote frontline location Saturday evening, kicking off a process intended to usher in peace to the conflict-ridden east.

139 Ukrainian troops and 52 rebels were exchanged, according to a separatist official overseeing the prisoner swap at a no man’s land location near the village of Zholobok, some 20 kilometers (12 miles) west of the rebel-held city Luhansk. 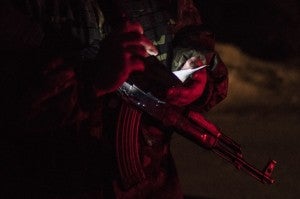 A Ukrainian serviceman checks a driver’s documents as he guards a checkpoint in Severodonetsk, eastern Ukraine, Saturday, Feb. 21, 2015. AP

A busload of Ukrainian soldiers in military fatigues was transported earlier in the day from the main rebel stronghold of Donetsk to a rural spot some 140 kilometers (90 miles) to the northeast, before joining up with other groups of fellow captives.

After arriving at the location near Zholobok, the troops were made to line up and listen to a speech by a rebel representative, who ordered the men to leave the territory claimed by the separatist movements in the regions of Donetsk and Luhansk.

The soldiers — some of them using crutches, while one was carried on a stretcher — then walked for around 3 kilometers (2 miles) to a rendezvous point.

Ukrainian President Petro Poroshenko wrote on his Twitter account that he was informed the process had begun by the national security service. His spokesman, Svyatoslav Tsegolko, later said one more Ukrainian soldier prisoner was to be freed in the coming days.

The peace agreement signed last week in Minsk foresees an exchange of all prisoners in the conflict. It is unclear how many are held in total on both sides, although the Donetsk separatists have said Ukraine is holding about 580 rebels as prisoners.

Rebels said the bulk of the Ukrainian soldiers being released Saturday were captured during recent fighting for the strategic town of Debaltseve, which was taken over by separatists in the past week. 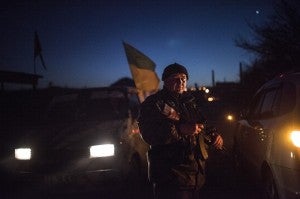 The self-styled Donetsk People’s Republic added in a statement that most of the people handed over by Ukrainian authorities were civilians.

But “fewer than 50 percent of those exchanged (by the Donetsk People’s Republic) were military prisoners,” the statement said.

The rebel statement cited what it said were observers at the swap saying many of the prisoners released by the Ukrainian government showed signs of maltreatment.

“Some prisoners could not make their own way independently. Meanwhile, all of the military prisoners transferred to the Ukrainian representatives were in good shape,” it said.

An Associated Press journalist saw at least one person released by government forces being pushed in a wheelchair.

Ukrainian authorities didn’t immediately respond to the rebels’ claims. They have earlier complained bitterly that their troops have been severely mistreated by their rebel captors. Ukrainian soldiers taken prisoner after the separatists seized the airport in Donetsk from government forces in January were forced to parade through the city and subjected to physical and verbal abuse by fighters and residents.

Video footage filmed and uploaded to the Internet by rebels earlier this month showed badly wounded Ukrainian troops attacked at a position near Debaltseve being beaten by separatist combatants.

Also Saturday, Ukraine’s military and the Russia-backed separatist rebels accused each other of continuing to mount attacks a week after a cease-fire was called.

Ukrainian security spokesman Col. Andriy Lysenko said that one serviceman was killed and 40 wounded in attacks over the past day. He did not state a total number of attacks, but said there were 10 mortar attacks on Ukrainian forces in the village of Shyrokyne on the fringes of the strategic port city of Mariupol.

Lysenko said rebels continued to move equipment toward Mariupol. Concerns persist that rebels aim to seize the city which would aid establishing a land corridor between mainland Russia and the Russia-annexed Crimea peninsula.

The agreement reached in the Belarusian capital, Minsk, by the leaders of Ukraine, Russia, Germany and France called for the guns to go quiet on Sunday.

The warring sides were supposed to begin drawing back heavy weapons from the front lines on Tuesday, but international monitors say they’ve seen no sign of that yet.

Russian and Ukrainian military officials overseeing the hoped-for peace process announced Friday that the Ukrainian government and the rebels had worked out a plan to begin the weapons pull-out.

Heidi Tagliavini, an envoy for the Organization for Security and Cooperation in Europe who led the talks with Russia and Ukraine that also included rebel figures, remained cautiously hopeful.

“There is not a single day in the Ukrainian conflict when we can feel sure what the next day will bring,” she said.