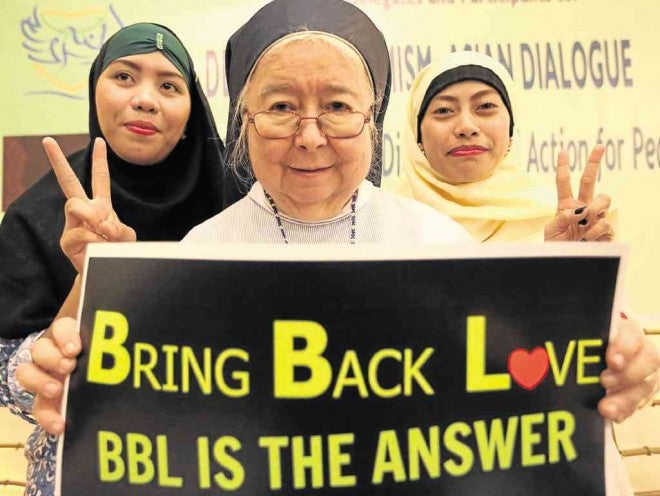 Malacañang may finally be facing up to the fact that President Benigno Aquino III may have to bow out in 2016 without his longed-for “Bangsamoro entity” in place.

Though this is a question she has not been able to put to the President, deputy presidential spokesperson Abigail Valte on Friday said the delay in the passage of the Bangsamoro Basic Law (BBL), which is supposed to give the constitutional underpinning for an expanded autonomous region for the country’s Muslim minority, is a reality.

“We have accepted that fact, that there will be a delay, but what’s important is, it’s still on the table,” Valte told a press briefing on Friday.

She insisted that Congress leaders have given assurances that they have not dropped the draft BBL bill, which Mr. Aquino had submitted as a priority measure.

“They recognize that it’s an important piece of legislation, and when the hearings commence, we will come to the deliberations ready, and as has always been the case, our peace panel will be ready to answer the questions,” Valte said.

The peace settlement provides for the holding of a plebiscite among the constituent provinces and a yearlong transition to be completed by May 2016—when elections to choose the leaders of the newfangled autonomous region will be held, to be synchronized with that year’s national elections.

Before this can happen, Congress must approve the BBL by March 20, its last day of session for the first quarter of the year.

Malacañang on Friday defended Deles and Ferrer, saying the two “are exerting their best efforts to be able to explain the situation.”

“It is not a secret that they have open communications—being part of the panel and being the President’s peace advisers—that they have a more regular opportunity than most of us to speak to the other table. We understand also their need to convey the information that is conveyed to them,” Valte said.

“Some may think it is difficult but we will continue to stay the course,” said Valte.

Palace warns on junking BBL: Remember the costs of war

Read Next
MILF tipster gets P15M
EDITORS' PICK
Acer Philippines welcomes you to its first flagship store
New Year, New Rediscoveries
Biden says Covid-19 expected to kill ‘well over 600,000’ in US
UP president challenges AFP claim on Reds’ campus infiltration
WHO says fabric facemasks still work against virus variants
Is your company a growth champion? Stand up and be recognized!
MOST READ
Cop, 12 others killed in Maguindanao shootout
Ate Vi’s message to those against ABS-CBN’s franchise renewal
NBI files raps vs top execs of 2 tech firms
OVP spokesman tells Mocha Uson: Don’t drag us into your nonsense
Don't miss out on the latest news and information.