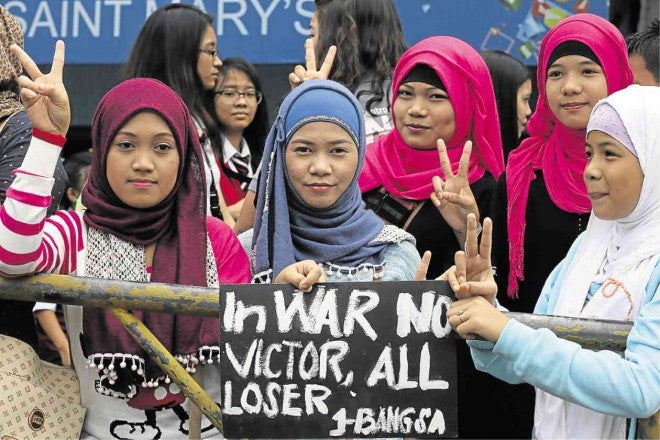 PEACE IS THE ANSWER Members of several Moro groups make the peace sign with their fingers during a rally at the Golden Mosque in Quiapo, Manila, on Friday. The Moro groups denounced war as a solution to the hostilities in Mindanao, and urged Congress to proceed with the hearings on the Bangsamoro Basic Law that has been on hold since the bloody Mamasapano clash of Jan. 25. JOAN BONDOC

The Senate may send questions to President Benigno Aquino III about his role in the Jan. 25 police operation in Mamasapano town, Maguindanao province, amid mounting calls for him to disclose what he knows about the operation that cost the lives of 44 police commandos, senators said on Friday.

Once the President comes clean on the operation, the committees could wrap up the inquiry into the Special Action Force (SAF) debacle, they said.

“That’s possible. Nothing wrong with writing questions, but we should not be offended if he doesn’t answer us,” Sen. Aquilino Pimentel III told reporters in a phone-patch interview.

The committees on public order, peace and finance inquiring into the clash could send questions to the President in the form of “written interrogatories,” Pimentel said.

Sen. Grace Poe said the President has begun talking about his knowledge of the incident, but the senators may course questions through his alter egos in next Monday’s hearing.

She said she was hopeful Mr. Aquino would “continue to give more details.”

“We are constrained by the principle of separation of powers. Nonetheless, we may consider to course crucial questions through his alter egos in attendance during the hearing on Monday who may seek appropriate clearance, too, for the purpose,” she said in a text message.

The President met anew with widows of the slain troopers last Wednesday night, but left key questions unanswered, including what he did after he was informed about the fierce firefight between the SAF troopers and Moro rebels.

Pimentel deferred to the three committees to make the decision.

“We had additional information given by [Director General] Purisima,” he said. “I will not divulge the details. Ask Senator Poe what she wants to disclose to the public.”

Otherwise, based on Purisima’s disclosures and Mr. Aquino’s national addresses, “we can piece together what happened,” he added.

Sen. Ferdinand Marcos Jr., chair of the local government committee that conducted public hearings on the proposed Bangsamoro Basic Law (BBL), said the inquiry would be complete once the President gave his side of the story.

Marcos said the senators had pieced together the circumstances on the ground, but not the goings-on at the highest level of command during the mission to capture Marwan.

“It doesn’t help that the President has not spoken on the matter. This is very easy. He should tell us, instead of us speculating and asking others to tell us the story. Once he makes a credible explanation, our hearing is finished,” he said in a radio interview.

Both Pimentel and Marcos agreed that the public outrage has not reached a crisis and did not necessitate the President’s resignation.

“I don’t feel the clamor for a regime change,” Pimentel said. “I could feel the disappointment, and BBL support has waned, but as far as people clamoring for changing the President, I don’t feel it.”

Marcos said: “Nothing will happen if he resigns. If at all, that will only foment disorder. I agree with a report: ‘Don’t step down, step up.’ Step up to your responsibility. Step up to the country. And tell them exactly what is happening and what your role was in this Mamasapano massacre.”

He said sending questions to the President was an option.

“But the President should show leadership and explain to the country all the facts,” he said.

Pimentel said Monday’s hearing would also look into reports of US involvement in the Mamasapano operation.

“That will be very interesting. News reports said there were eight Americans sighted in the area. I have not heard anything like that in the executive sessions,” he said.

He also cited reports that a drone was seen hovering over the area during fighting between the SAF commandos and the Moro rebels.

“Intelligence is different from presence,” he said, responding to claims that the United States merely swapped intelligence information with the SAF on the presence of Marwan in Mamasapano.

“I will not confirm when it comes to diplomatic relations at this point but definitely it will be part of our committee report,” Poe said when asked last week about the US role.

Marcos said it wasn’t clear what role the United States played in the operation to capture Marwan.

“They played a role. Whether that role is acceptable or not is something we cannot say until we hear them. If they were conducting trainings, that’s not a problem. If they’re operating, that’s another matter,” he said.

Former Sen. Panfilo Lacson (@iampinglacson) tweeted that Palace’s “tell all at the right time” statement is not helping the situation any.

“Telling the whole truth needs no proper timing,” he said.