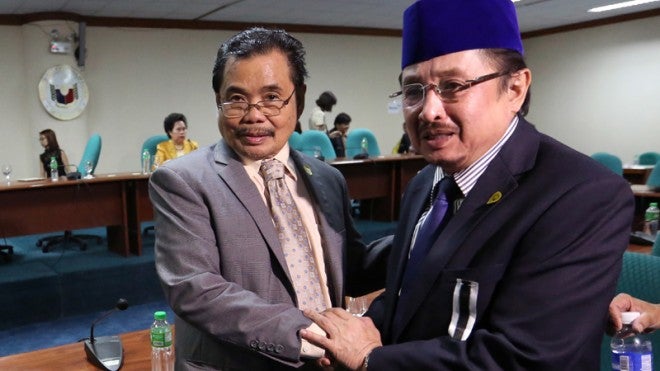 MANILA, Philippines–The proposed Bangsamoro Basic Law (BBL) carving no less than a “substate” in Mindanao may require a constitutional surgery, legal experts said on Monday during a Senate hearing.

Merlin Magallona, former dean of the University of the Philippines College of Law, said at the resumption of the joint hearings of the committees on constitutional amendments, local government and peace that the BBL required amendments to the 1987 Constitution.

“What occasions a major constitutional surgery by reason of the BBL is the creation of a political system that has the characteristics of a state in that it is possessed of exclusive powers, having its own territorial domain, population and government, all integrated to one another in relative independence from the national government,” he told the hearing on the BBL.

In effect, a substate would emerge within the Philippine state “with a phenomenon of a divided sovereignty,” he added.

Former Supreme Court Justice Adolf Azcuna, however, argued that there was no need to amend the Constitution to effect the autonomous region precisely because the Charter “has mandated it.”

The grant of territory does not make Bangsamoro a separate state, Azcuna said. After all, a sovereign state consists of territory, people, government and sovereignty or independence, he said.

“It’s not enough to have a definite territory to become a separate state. You must have independence, and independence is definitely not granted to the autonomous region in this proposed setup,” he said.

Besides, the autonomous region “is stated to be part of Philippine territory,” and hence, is not separate but simply delineated for governance, said Azcuna, a member of the handpicked commission that drafted the 1987 Constitution.

Congress is eyeing to pass the draft BBL by March so this could be ratified in Bangsamoro areas in October, and its new officials would be elected in the May 2016 national elections.

The draft BBL is “palpably, incorrigibly unconstitutional,” according to Pablo Garcia, a former deputy speaker and a constitutional expert.

The Constitution, he said, does not mention granting Congress the power to create a new, different entity.

If at all, the Constitution authorizes five territorial subdivisions: provinces, cities, municipalities, barangays and autonomous regions, he said.

“May Congress create other autonomous regions, say for Ilocos, Bicol, or Visayas? The answer is no,” he said. “It can only be in Muslim Mindanao and the Cordilleras.”

Garcia posed the question: Does Congress possess the power and authority to create the Bangsamoro political entity?”

“The answer is inevitable: A resounding no. No, no, no,” he said. The Autonomous Region in Muslim Mindanao (ARMM) is a “constitutional creation, and as such, can’t be abolished by legislation,” Garcia said.

The framework agreement, or the Comprehensive Agreement on the Bangsamoro (CAB), Magallona also observed, is “replete with stipulations that are outside the sphere of compliance” with the Constitution.

“Best right at the start, the peace negotiations or both sides rejected the powers, functions and responsibilities granted to autonomous regions as invested by the Constitution in favor of the national government under the foregoing provision and rejected as well such powers and functions as the Constitution defines for autonomous regions,” he said.

Instead, they created a new political system “by which they conceptualized as asymmetric the relationship of the national government and the Bangsamoro,” Magallona said.

“They characterized the status quo as ‘unacceptable,’ apparently in particular the concept of autonomous region as characterized by the Constitution,” he added.

Magallona also took note that President Aquino never made any reference to the Constitution when he issued Executive Order No. 120 in October 2013 to implement the CAB.

If at all, in the way the EO was worded, the President was “of the mind” the Constitution should be amended to conform to the BBL in case of conflict between the two, he said.

“In other words, the President intends a constitutional change but a change over and above the supremacy of the BBL which is pending in Congress as an urgent bill in House Bill No. 4994 and Senate Bill No. 2408,” he said.

Contrary to claims, Mohagher Iqbal, chair of the Bangsamoro Transition Commission, said that the draft BBL carried at least 20 provisions showing the checks and balances that the central government has over the future Bangsamoro government.

Chief of these is the President’s general supervision over the Bangsamoro, he said.

Palace warns on junking BBL: Remember the costs of war