At the resumption of the hearing of the Senate committee on public order, joint with committees on peace, unification and reconciliation, and finance, SenatorFerdinand “Bongbong” Marcos Jr. peppered Purisima with questions on his earlier testimony that he only gave Nepeñas an advice, and not an order, to keep the Mamasapano operation from acting PNP chief Deputy Director Leonardo Espina and Interior Secretary Manuel “Mar” Roxas II. 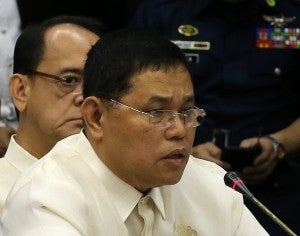 Purisima admitted giving that advice to Napeñas after they met with President Benigno Aquino III in Malacañang on January 9, 2015, two weeks before the January 25 Mamasapano encounter.

“Why did you feel the need to give that advice?” Marcos asked Purisima.

(That’s not the case, your honor. It was indicated in the PNP-SAF’s plan (to carry out the mission as) timed on target.)

It was also after that meeting that Purisima told Napeñas that he will answer to Armed Forces of the Philippines Chief of Staff General Gregorio Pio Catapang.

Asked by Senator Grace Poe what he meant by his statement, Purisima said it meant that he himself would inform Catapang about the operation which he said he did at 5 a.m. on January 25.

“I texted General Catapang. I was trying to call him that the operation was ongoing already,” he said.

Asked by Marcos if it was the subject of their discussion when Purisima stayed behind the President after the meeting in Malacañang, the resigned officer answered in the negative.

Marcos then asked what he and the President discussed after the meeting, to which Purisima said: “Something personal, your honor.”

Like Marcos, Senate President Franklin Drilon asked Purisima the reasons why he advised Napeñas not to inform Roxas and Espina about the operation.

“Was it in the operation plan not to inform Roxas and Espina?” asked Drilon.

“What do you mean you don’t know? Come on,” an irked Drilon said.