Speaking at the opening hearing of the inquiry by the Senate committees on public order, peace and finance, Director Getulio Napeñas said he, Purisima and Senior Supt. Fernando Mendez, the PNP Intelligence Group director, briefed Mr. Aquino on the “mission update” and on the “new concept of operations” for Oplan Exodus.

Deputy Director General Leonardo Espina, the PNP officer in charge, and Interior Secretary Mar Roxas, who has supervision over the PNP, were not at the briefing.

Napeñas said the briefing was held in Bahay Pangarap, Mr. Aquino’s house at the Malacañang compound.

In two addresses to the nation after the tragic commando operation, Mr. Aquino said that he was aware of the SAF mission and that he did his own investigation to find out how it ended in disaster for government security forces.

Mr. Aquino did not say that Purisima, ordered suspended by the Ombudsman last December over allegations of graft, had a role in the planning of the operation.

Neither did the President say who gave the order to launch the assault on Marwan’s hideout in Mamasapano town, Maguindanao province, early on Jan. 25.

Oplan Exodus, he said, followed a string of aborted missions to go after Marwan and Usman. 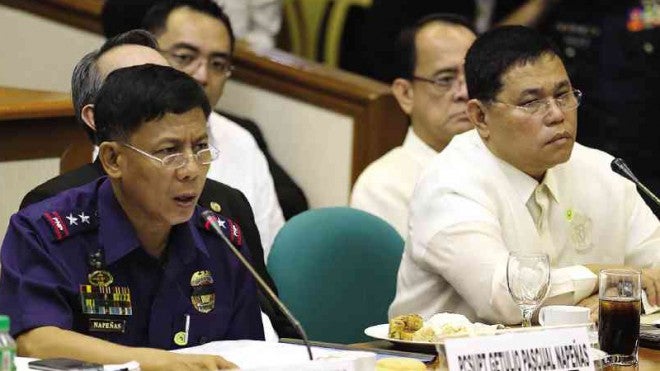 This was the reason a high level of operational security and secrecy was necessary for Oplan Exodus, he said.

During the Jan. 9 meeting in Malacañang, he said, Mr. Aquino told him about the need for coordination with the Armed Forces of the Philippines.

“His Excellency cited the coordination with the AFP that he earlier stated in his press statement,” Napeñas said.

After the briefing, Napeñas said he and Mendez went out but Purisima stayed behind.

“It was when he came out that [Director General] Purisima [told me], ‘Don’t tell the other two about this, just do it later when we’re there. I will take care of [AFP Chief of Staff] Gen. [Gregorio Pio] Catapang,’” Napeñas said.

He said the “other two” were Espina and Roxas.

Napeñas denied that he took orders from Purisima, saying he considered Purisima’s statement a suggestion and that it was he who was in charge of the operation.

He also denied that he was Purisima’s, or anyone else’s, protégé, and that he moved up the ranks through hard work.

Purisima, who had been involved in the previous attempts to capture Marwan before he was suspended, has resigned as PNP chief.

Under questioning by Sen. Teofisto Guingona III, Purisima admitted that two meetings on the plan to get Marwan and Usman were held in his house at the PNP headquarters in Camp Crame, Quezon City, although he was already suspended.

“They were just updating what was the progress of their operation,” Purisima said. “I did not give any instructions to them.”

Guingona pressed Purisima on keeping the mission a secret from Espina and Roxas. “In effect, you ordered him (Napeñas) not to follow the chain of command. What was on your mind? What was your motivation?” Guingona asked Purisima.

Purisima denied ordering Napeñas to keep Oplan Exodus a secret from Espina and Roxas. “If ever I uttered words to that effect, it was in the form of an advice, not as a directive or order. This may be also in support of their plan that will inform everyone time-on-target,” he said.

Asked by Drilon about the difference between “command” and “advice,” Purisima answered: “A command should be followed; an advice may not be followed.”

Napeñas, Purisima added, could not have followed orders from a suspended PNP official, who was not part of the chain of command.

Napeñas said he considered Purisima’s statement, but it was he alone who decided not to tell Espina and Roxas about Oplan Exodus.

“It was not an order. It was a judgment call on my part not to inform the OIC PNP,” Napeñas said.

“But I informed him [when] the troops were [already] on the ground because of the statement of General Purisima, which I considered in relation to the mission,” he said.

Sen. Grace Poe, head of the public order committee, told reporters later that she was not convinced that Purisima only gave advice to Napeñas.

Poe noted that if a subordinate is brought by his superior to Malacañang, the subordinate will likely interpret his boss’ statement as an order even if there is no directive from the President.

Explaining why he dealt with Purisima, Napeñas said he understood that the suspended PNP chief was the “focal person” who was always consulted by President Aquino on the mission to get Marwan and Usman.

The suspended PNP chief was “constantly being asked by the President” about the operation, he said.

Mr. Aquino, however, did not give the order for the mission to proceed during the Jan. 9 briefing at Bahay Pangarap, Napeñas said.

“The President didn’t give an order. It was a mission update that was provided,” he said in response to a question from Sen. Antonio Trillanes IV.

He said Purisima did not mess up the operation but instead provided vital information “through text messages.”

Napeñas said it was clear to him that Purisima was under suspension and that Espina was his superior officer.

Purisima denied giving the go-signal for Oplan Exodus, saying he was not even informed that the SAF commandos had already “jumped off.”

Napeñas, however, said he informed Purisima by text on Jan. 19 that the operation would be launched between Jan. 23 and 26.

Napeñas said the launch was part of a “continuing operation.”

Napeñas denied that the SAF had been ill-prepared for the operation, saying there had been rehearsals and exercises on movements at night to avoid detection. Equipment were regularly checked and prepared, he said, and the commandos were moved to their staging areas from Jan. 21 to 23.

“The SAF troopers who made their way to Barangay Tukanalipao, Mamasapano, Maguindanao, were highly trained individuals. They knew what they were doing and knew what to do in times of adversity and hostility,” he said.

He said Supt. Raymond Train, the commander of the assault force, took down 25 to 30 attackers. Train, he said, believed the assault force of the SAF’s 84th Company, which was tasked to get Marwan, gunned down 150 assailants.

“Napeñas is a liar. Why would he claim that the SAF were able to kill that many people when they were already pinned down?” said Abu Misri Mama, a spokesperson for the BIFF.

Mama, however, confirmed that BIFF guerrillas were among the fighters that fought the SAF’s 55th Company in the cornfield at Mamasapano.

He said the BIFF guerrillas took 10 high-powered firearms from the site, including a 90RR or recoilless rifle.

Napeñas said the SAF body count would have been fewer than 44 had military support the SAF requested come on time.

Also during the hearing, Director Benjamin Magalong, head of the PNP board of inquiry looking into the Mamasapano incident, said there was a “gap” between the plan of the SAF forces going after Marwan and what happened during the actual operation.

Magalong said the SAF took two hours longer than planned to reach the target because of the difficult terrain and strong river currents.

But it was eventually able to reach its destination. At 4:15 a.m., a call to the tactical command center confirmed that Marwan had been killed.

But “booby traps” in the area alerted BIFF fighters to the incursion of the government security forces in the area, resulting in a fire fight.

“There was clearly no intent to let anyone in the 55th SAF Company to live,” Espina said, noting that many of the commandos were shot to the head with high-powered rifles at close range.

He said that after slaying the commandos, the rebel forces tried to kill more.

“After killing my men in the 55th Company, they maneuvered and joined other forces in the area to kill some of my men belonging to the Seaborne Company. This after fully realizing that troops in there were from the government,” Espina said. With a report from Inquirer Mindanao