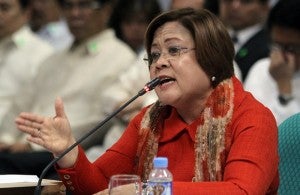 Presenting her own legal framework before the Senate hearing on the bloody encounter, de Lima said the mere participation of the BIFF and PAGs make them liable considering the crimes they have committed prior to the January 25 carnage.

“The said groups are therefore liable to the fullest extent of the law with the range of crimes they committed during the Mamasapano incident,” she said.

The “simple reason is that the BIFF and PAGs are per se illegal associations engaged in illegal activities even before the encounter with the PNP,” she continued.

The 74 Special Action Force troopers had engaged in the 12-hour long bloody gunfight with Moro Islamic Liberation Front, BIFF and reportedly PAGs of the Ampatuan clan.

After de Lima’s presentation, Rashid Ladiasan, of the MILF’s Committee on Cessation of Hostilities, said most of the students in bomb-making of Malaysian terrorist Zulkifli Bin Hir or Marwan came from BIFF.

Marwan was the target in the Operation Exodus.