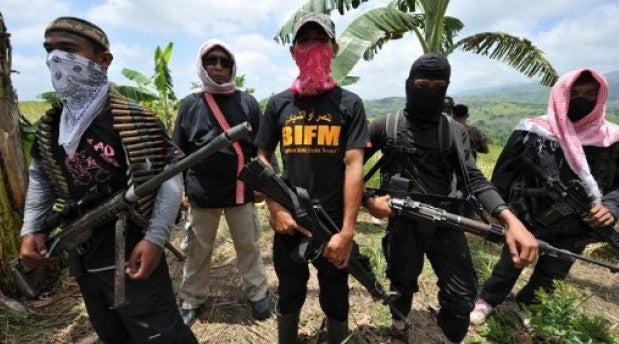 “The clash was triggered by a no-coordination police operation,” he said.

He said the police commandos first attacked an area where there were no terrorists.

“They also attacked our position, that’s how our troops were dragged into the encounter,” he said.

In the early reports, Capt. Joanne Petinglay, chief of the Army’s 6th Infantry Division public affairs unit, said the military was conducting clearing operations in Mamasapano, where the policemen were killed in a clash with BIFF fighters and other outlaws.

Petinglay could not say exactly how many policemen were killed. She said Army troops backed by armored personnel carriers were in the area to assist Maguindanao policemen.

“As of now I cannot give an exact number of fatalities, it was a police operation, there was no coordination with our troops on the ground,” Petinglay told the Inquirer.

Al Haq said eight SAF and members of the PNP Criminal Investigation and Detection Group were seized by the BIFF.

But a police source in Maguindanao, who asked not to be named, said at least 36 police officers belonging to the SAF unit in the Autonomous Region in Muslim Mindanao were killed, disarmed and mutilated.

“We are still verifying the casualty figure, what we are doing is we assist the police in extracting the fatalities,” Petinglay said.

She said the SAF unit came to Mamasapano for a “law enforcement operation against a most wanted man, a high-value target, a Jemaah Islamiyah member.”

Al Haq told the Inquirer that the SAF was to serve a warrant of arrest on Malaysian terrorist Zulkifli bin Hir, also known as Marwan, when the group encountered and clashed with BIFF fighters under Commander Guiawan in Tukanalipao.

“They were also after Basit Usman,” Al Haq said. Usman and Marwan are bombmaking experts from the Indonesia-based terrorist group Jemaah Islamiyah.

“They were trapped and may have run out of bullets during the fierce firefight,” a police source said. He added that Marwan was also killed along with several BIFF members.

Roads leading to Mamasapano from Shariff Aguak in Maguindanao were closed and reporters were barred from entering the encounter site, which is about 15 kilometers from the national highway linking Isulan in Sultan Kudarat and Cotabato City passing by Maguindanao.

Petinglay said troops from the 2nd Mechanized Brigade were still in the area.

Abu Misri Mama, speaking for the BIFF, claimed that the firefight started after the SAF tried to search the area for Marwan and clashed with the MILF’s 105th Base Command.

Marwan has a $5-million bounty for terror attacks that also earned him a spot on the most wanted terror list of the FBI.

Mama said the BIFF’s 1st Brigade intercepted the reinforcement from the military at around 9 a.m.

Petinglay denied the claims of Mama, saying there were no reports of firefights involving the military.

“Possibly the group that the BIFF clashed with is the SAF,” she said.

“Because of this, the SAF has intruded and clashed with the 105th Base Command resulting in at least 30 casualties,” Al Haq said.

“The Coordinating Committee on the Cessation of Hostilities facilitated the request of the PNP to retrieve their casualties but unfortunately many were not able to survive because they were not evacuated immediately. Hopefully, all bodies will be retrieved,” Al Haq said.

He said the SAF group that participated in the operation was not originally assigned to the area, as it was from General Santos City.

“They were all new to the area and know little about it,” Al Haq said.

“This should be a lesson to everybody not to ignore the ceasefire mechanism and to understand more the ongoing peace process,” Al Haq said.–With reports from Karlos Manlupig and AFP